Letters are not case-sensitive
Send
The world was rightly outraged by the murder of Jamal Khashoggi, but the bombs of Mohammed bin Salman and his Emirati allies are killing dozens each day in Yemen.

“Bombs and bullets have killed thousands of civilians across Yemen, while the crushing descent into the world’s worst humanitarian crisis has placed many millions of already food-insecure people at imminent risk of famine.” Sherine Tadros, Amnesty International's UN Office Director in New York.

“Violations by one party to the conflict do not give carte blanche to the others to fight back at all costs,” said the High Commissioner. “Even wars are regulated by law – all parties to the conflict are bound to respect international humanitarian law and human rights law as applicable.” Said the UN human rights chief, Michelle Bachelet. She called for an immediate end to the military escalation, as catastrophic levels of food insecurity could soon threaten the lives of 14 million people across the country. She urged the Saudi-led coalition to immediately remove restrictions on the safe and expeditious entry into Yemen of indispensable humanitarian supplies and other goods.

Since conflict escalated in March 2015, OHCHR has counted a total of 17,640 civilian casualties in Yemen, including 6,872 dead and 10,768 injured. The majority of these casualties – 10,852 – resulted from airstrikes carried out by the Saudi-led Coalition. For those having survived the repeated attacks, access to basic services and sources of income has become increasingly challenging. Today, three quarters of the entire Yemeni population – 22 million women, children and men – find themselves dependent on some form of humanitarian assistance to survive. 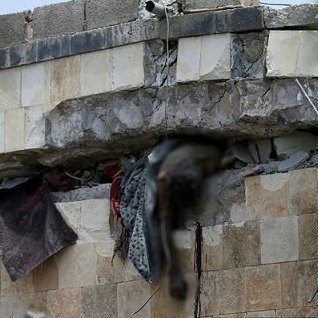 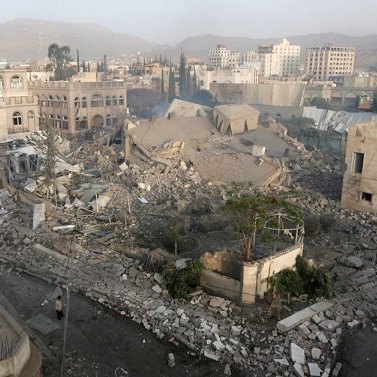 According to the Yemen Data Project, Saudi and Emirati aircraft have conducted over 18,500 air raids on Yemen since the war began—an average of over 14 attacks every day for over 1,300 days. They have bombed schools, hospitals , homes, markets, factories, roads, farms, and even historical sites. Tens of thousands of civilians, including thousands of children, have been killed or maimed by Saudi airstrikes.
But the Saudis and Emiratis couldn’t continue their bombing campaign in Yemen without U.S. military support. American planes refuel Saudi aircraft en route to their targets, and Saudi and Emirati pilots drop bombs made in the United States and the United Kingdom onto Yemeni homes and schools. Saudi crimes in Yemen are not limited to regular and intentional bombing of civilians in violation of international humanitarian law. By escalating the war and destroying essential civilian infrastructure, Saudi Arabia is also responsible for the tens of thousands of Yemeni civilians who have died from preventable disease and starvation brought on by the war.

To be clear, there is no party in this war is without blood on its hands but the de facto immunity that the international community has given Saudi Arabia through its silence prevents real justice for violations by all sides. The people of the Middle East have long and bitter experience with international double standards when it comes to human rights, as purported champions of universal rights in the West regularly ignore grave violations by their allies in the region, from the former shah of Iran to Saddam Hussein to Saudi Arabia’s current crown prince, Mohammed bin Salman.

Those in the United States and elsewhere who are incensed by Khashoggi’s murder must summon similar moral clarity and condemn Saudi Arabia’s daily killing of innocents in Yemen. If U.S. lawmakers had spoken up and taken action on Yemen years ago, when Saudi Arabia’s rampant violations were already well known, thousands of Yemeni civilians who since then have been killed by airstrikes or starvation would still be alive today—and perhaps Jamal Khashoggi would be, too.

Yemen in the Inferno of War and Children Suffering from Famine and Disease children ,Saudi Arabia ,famine ,Yemen