Letters are not case-sensitive
Send
Iran has put forward its Arasbaran protected area as a candidate for inclusion in the UNESCO World Heritage list for 2018.

The Cultural Heritage, Tourism and Handicrafts Organization has compiled a comprehensive file for possible inscription of the Arasbaran region on the UNESCO list, said Morteza Abdar, an official with the CHTHO.

The region enjoys distinctive characteristics as it embraces one of the oldest brick domes in the world, a relatively exact circular urban terrain and some vestiges of other historical monuments, Mehr news agency quoted Abdar as saying on Jan. 19.

Babak and Avarsin forts are amongst other historical sites across the area, located in the northwestern West Azarbaijan Province.

The Arasbaran protected area measures 78,560 hectares with a circumference of 134 kilometers. The altitude varies from 256 meters in the northern part to 2,896 meters which is the highest elevation in southern part of the area, according to the UNESCO website.

The region is of high importance due to its rich flora and fauna in particular presence of rare species. There can be found some endemic plant species including long-leaved trees such as Juniperus foetidissima and endangered species such as Taxus baccata.

According to the UNESCO website, in spite of permanent presence of tribes and domesticated animals there are variety of characteristic plant species. There are evidences that show Dinosaur fossils are frequent in this area .For example, some Dinosaurs fossils have already been found in Kharvanagh.

Iran’s initial attempt on placing the protected area on the UNESCO list dates back to 2007. 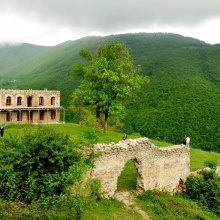