Letters are not case-sensitive
Send
Following the approval late last year of an independent panel to assist in the investigation and prosecution of those responsible for war crimes or crimes against humanity in Syria, the United Nations announced that the mechanism will be headed by a senior judge or prosecutor with extensive criminal investigations and prosecutions experience.

According to a note from a UN spokesperson, the mechanism will be established in phases until it is fully functioning and the Secretary-General will announce the person leading it by the end of February.

The head of the mechanism, which is formally called the ‘International, Impartial and Independent Mechanism to assist in the Investigation and Prosecution of those Responsible for the Most Serious Crimes under International Law committed in the Syrian Arab Republic since March 2011,’ will be assisted by a deputy and a secretariat.

The two primary tasks assigned to the mechanism include:

In discharging its responsibilities, the mechanism will closely cooperate and coordinate with the Independent International Commission of Inquiry on Syria (Syria CoI) and the two panels will be complementary to each other.

“However, there is a clear distinction between the Syria CoI and the mechanism in terms of functions. The Syria CoI focuses on information collection, publicly reporting and making recommendations notably to Member States,” explained the spokesperson.

The mechanism will build on the information collected by others, by collecting, consolidating, preserving and analysing evidence and information. It will also prepare files to assist in the investigation and prosecution of those responsible for the most serious crimes under international law.

The resolution approving the mechanism was adopted by the General Assembly – the universal body comprising all 193 UN Members States – on 21 December by a recorded vote of 105 in favour and 15 against, with 52 abstentions. 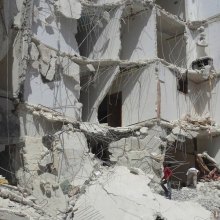