Letters are not case-sensitive
Send
The senior United Nations humanitarian official in Yemen voiced extreme concern about the safety and well-being of citizens in the south-eastern part of the country, where military operations are cutting off services and causing harm to civilians.

“A halt to the fighting is required to facilitate the delivery of assistance to Al Mokha and enable the free movement of civilians,” said Humanitarian Coordinator in Yemen, Jamie McGoldrick, in reference to the port city on the Red Sea coast of the country.

Up to 30,000 people are estimated to be trapped in Mokha, roughly one-third of the population, and in need of immediate protection and relief assistance, Mr. McGoldrick said.

He noted also that scores of civilians have been injured by repeated airstrikes, shelling and sniper attacks in and around Mokha, which has also ground most services, including the main market and the water supply system.

Meanwhile, in Dhubab, also a district of Taiz Governorate, tens of thousands of civilians are being forced to flee their homes to escape the fighting.

Mr. McGoldrick warned that some are using mined roads, and many have already been previously displaced or lost livelihoods in the fighting.

“I call on all parties to the conflict to meet their obligations under the international humanitarian law,” he said, urging all parties to ensure the humanitarian organizations have “rapid, safe and unimpeded access to reach the people in need in the town of Al Mokha and the wider affected region.”

In addition to concerns for civilians, the UN aid official expressed concern about recent damage to roads and bridges connecting the port city of Al Hudaydah with other governorates.

Noting that infrastructure is vital for moving humanitarian and commercial supplies, Mr. McGoldrick said he deplored such actions “as they risk further isolating Yemeni communities and aggravate the already alarming food security situation.”

UN agencies and partners are mobilizing food, water, shelter and medicines for those in need, according to the UN Office for the Coordination of Humanitarian Affairs (OCHA). 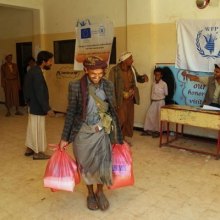