Letters are not case-sensitive
Send
The number of food insecure people in Yemen has risen by three million in seven months, with an estimated 17.1 million people – more than two-thirds of the entire population of 27.4 million – now struggling to feed themselves, according to a joint assessment by three United Nations agencies.

“The speed at which the situation is deteriorating and the huge jump in food insecure people is extremely worrying,” said the Food and Agriculture Organization's (FAO) Representative in Yemen, Salah Hajj Hassan, in a news release.

“Bearing in mind that agriculture is the main source of livelihood for the majority of the population, FAO is urgently calling for funds to scale up its agricultural livelihoods support to farmers, herders and fishing communities to improve their access to food in 2017 and prevent the dire food and livelihood security situation from deteriorating further,” he added.

Of the 17.1 million food-insecure people, about 7.3 million are considered to be in need of emergency food assistance, according to the preliminary results of the Emergency Food Security and Nutrition Assessment, which attributed the rapid deterioration of the conditions to the ongoing conflict.

The UN and humanitarian partners has recently launched an international appeal for $2.1 billion to provide life-saving assistance to 12 million people in Yemen in 2017 – the largest-ever humanitarian response plan for the war-torn country.

The joint assessment was conducted by FAO, the UN Children's Fund (UNICEF) and the World Food Programme (WFP) in cooperation with the authorities in Yemen. It is the first national, household-level survey conducted in the country since the escalation of the conflict in mid-March 2015.

Rates of acute malnutrition were found to have passed the “critical” threshold in four governorates, while agricultural production is falling across the country.

“We are witnessing some of the highest numbers of malnutrition amongst children in Yemen in recent times,” said UNICEF's Country Representative, Meritxell Relano.

She warned that children who are severely and acutely malnourished are 11 times more at risk of death as compared to their healthy peers, if not treated on time.

“Even if they survive, these children risk not fulfilling their developmental potentials, posing a serious threat to an entire generation in Yemen and keeping the country mired in the vicious cycle of poverty and under development,” she said.

Stephen Anderson, WFP Country Director, also sounded the alarm. “The current level of hunger in Yemen is unprecedented, which is translating into severe hardship and negative humanitarian consequences for millions of Yemenis, particularly affecting vulnerable groups.”

“Tragically, we see more and more families skipping meals or going to bed hungry, while children and mothers are slipping away with little to sustain themselves,” he said.

WFP is urgently calling for support to provide food for the seven million people who are severely food insecure and may not survive this situation for much longer, he added.

Meanwhile, the Office of the UN High Commissioner for Refugees (UNHCR) reported that fighting in the coastal districts of Al Mokha and Dhubab in the western governorate of Taizz is spreading to the inland districts of Al Wazi'iyah and Mawza.

“A result is that more than 34,000 people have fled their homes,” UNHCR spokesperson William Spindler told reporters in Geneva.

The UN refugee agency has mobilized assessment teams across displacement sites in Hudaydah, Ibb and the district of Maqbanah in Taizz, where recently displaced people are being hosted and began deliveries of emergency assistance, including basic relief items and emergency shelter.

The Office of the UN High Commissioner for Human Rights (OHCHR) said that extremely worrying reports have emerged about the impact on civilians of the fighting over the past two weeks, in the southwestern port of Al Mokha in Taizz Governorate. Credible reports indicate that Houthi-affiliated snipers shot at families attempting to flee their homes in Houthi-controlled areas – suggesting the use of civilians as human shields.

“Civilians were trapped and targeted during the Al Mokha fighting. There are real fears that the situation will repeat itself in the port of Al Hudaidah, to the north of Al Mokha, where air strikes are already intensifying,” UN High Commissioner for Human Rights Zeid Ra'ad Al Hussein said in a news release. 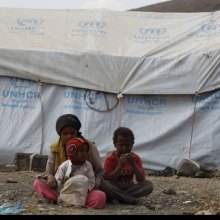