Letters are not case-sensitive
Send
Bahrain is at a tipping point. The first two months of 2017 alone saw an alarming upsurge in arbitrary and abusive force by security forces as well as the first executions since the uprising in 2011

Authorities in Bahrain must refrain from using excessive force against protesters, Amnesty International urged as mass protests are under way on 14 February, to mark the sixth anniversary of the 2011 uprising.

Bahrain is on the verge of a human rights crisis, as recent weeks have seen a pattern of increased repression, characterized by violence against protesters, executions, arbitrary detentions and a crackdown on freedom of expression.

“Bahrain is at a tipping point. The first two months of 2017 alone saw an alarming upsurge in arbitrary and abusive force by security forces as well as the first executions since the uprising in 2011,” said Lynn Maalouf, Deputy Director at Amnesty International’s Beirut regional office. “The authorities must rein in the security forces, respect the rights to peaceful assembly, association and expression, and stop executions, otherwise a full blown human rights crisis risks breaking out.”

On the evening of 12 February, hundreds of protesters took to the streets throughout several villages, in protest against the authorities’ not allowing the performance of religious funeral rituals for three men who were killed by coast guard forces on 9 February after they escaped from Jaw prison on 1 January. Bahraini Shi’a religious figures had called for mass rallies in protest. Some protests remained peaceful, while others turned violent.

Amnesty International obtained reports and photos of injuries caused by birdshot on the back, ear, foot and leg of protesters. In Sitra, a large armoured vehicle was filmed driving towards protesters, appearing to fire tear gas at body height, causing injuries. The vehicle was then bombed, with the group Al-Muqawama Liwehdat al-I’lam al-Harbi claiming responsibility for it. The Bahraini authorities have not responded publicly to this attack.

On 15 January 2017, three men were executed in Bahrain after nearly a seven-year hiatus and after a grossly unfair trial. In response, protests erupted in 20 villages across the country, a number of which turned violent, seeing government armored vehicles charging at protesters and almost running them over, as well as government forces using tear gas and shotguns to fire birdshot directly at protesters.

“For six years, the Bahraini government has been claiming that it has taken meaningful steps towards reform and upholding its human rights obligations, including by prosecuting those who were responsible for the violations that took place during the 2011 uprising. But the past few weeks have seen a very concerning renewed pattern of violations, including arbitrary detention and torture, facilitated by a continuing climate of impunity”, said Lynn Maalouf.

Despite these claims, the Bahraini government has cracked down over the past six years on freedom of expression, by increasing arbitrary restrictions on the media, banning protests in Manama and imprisoning those who voice their opinion.

In 2016, for example, prominent human rights defender Nabeel Rajab was yet again imprisoned, the main opposition party Al Wefaq was dissolved and its spiritual leader, Sheikh Issa Qassem’s nationality arbitrarily revoked and its Secretary General Sheikh Ali Salman given a nine-year prison sentence for peacefully stating his party’s goal of pursuing power in Bahrain, to achieve the reform demands of the 2011 uprising and to hold those responsible for human rights violations to account.

On 16 January the Ministry of Information issued an order suspending the online edition of Al-Wasat, an independent newspaper, due to its “repeated broadcastings inciting to discord in society and the spirit of sedition, disruption of national unity that affects public peace.” The Ministry of Information reinstated the online edition of Al-Wasat on 19 January.

Also, the government of Bahrain continues to detain Dr Ali al-Ekri and 11 opposition activists including Abdulhadi al-Khawaja and Hassan Mshaima and, who were arrested for peacefully opposing the government during the 2011 uprising. Many of those detained have alleged they were tortured during their interrogations. They described being beaten, forced to stand for extended periods of time and being threatened with rape by officers of the National Security Agency.

“Dr Ali al-Ekri and the 11 opposition activists are all prisoners of conscience who remain behind bars because of their peaceful involvement in the uprising - the Bahraini authorities must release them immediately and unconditionally”.

This is a summary of the report, for details go to: https://www.amnesty.org/en/latest/news/2017/02/bahrain-fears-of-further-violent-crackdown-on-uprising-anniversary/ 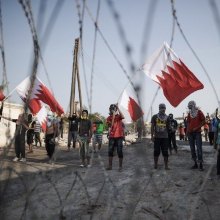