Letters are not case-sensitive
Send
As details on the destruction of and damage to Iraq’s rich and diverse cultural heritage emerge, the United Nations cultural agency has appealed to the international community to help protect and revive the country’s archaeological, religious and cultural sites for future generations.

“This is a turning point for the Iraqi people and for the world’s understanding of the role of heritage for societies in conflict situations,” said the Director-General of the UN Educational, Scientific and Cultural Organization (UNESCO), Irina Bokova.

Speaking at the end of a two-day meeting of the International Coordination Conference on the Safeguarding of Cultural Heritage in Liberated Areas of Iraq, Ms. Bokova added: “UNESCO is already mobilizing on the ground to support Iraq in protecting heritage and objects most at risk, and to fence off and guard sites.”

It also agreed to appoint a joint UNESCO-Iraqi Steering Committee to coordinate and advocate the many national and international initiatives to rehabilitate the cultural heritage of Iraq.

However, according to UNESCO the damage already done has been much fear than what was anticipated and the rehabilitation process is likely to require decades of work.

Noting the importance of action to safeguard Iraq’s heritage, the country’s Minister of Culture Fryad Rawandouzi highlighted: “As we reclaim our country […] We need help from UNESCO, the UN and others to rehabilitate museums, cities and sites […] We need a plan with a timeline, as well as technical and financial support.”

At the same time, there are fears that antiquities taken away from heritage sites may have been sold on the Internet and the black market and the money used finance activities of the terrorist group Islamic State in Iraq and the Levant (ISIL/Da'esh).

“We must stop the trade in Iraqi antiquities, adhere to Security Council Resolution 2199, and dry up [ISIL]’s money flow,” underscored Mohammad Iqbal Omar, the Iraqi Minister of Education.

Adopted in 2015, UN Security Council resolution 2199, among other provisions, banned all trade in looted antiquities from Iraq and Syria. It also encouraged steps to ensure such items are returned to their homelands, and called on UNESCO, Interpol, and other international organizations to assist in such efforts.

“Da'esh tried, but will never erase our culture, identity, diversity, history and the pillars of civilization. I call on the world to help us,” said added the Minister of Education. 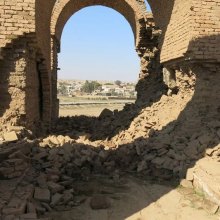