Letters are not case-sensitive
Send
Here you can't walk around freely. For the children it’s like living in a prison, because they are scared. In schools there are many gang members who harass and scare them.

The image of a dozen children playing behind a tall metal fence, surrounded by armed guards, says it all – in one of the world’s most dangerous barrios, even playtime happens under security lockdown.

We drive past the park in a small car, with our windows rolled down. The driver, a young man who was born a few blocks from where we are going, says local gang members need to see us – they are not too keen on visits from outsiders.

Seven rival gangs operate in the Rivera Hernández District. They control each of the 39 neighbourhoods that make up the area and the lives of the 150,000 men, women and children who live there.

Graffiti on several walls shows how the territory is divided, and warns residents of the consequences of stepping out of line.

Everyone who lives here knows the ground rules: do not hang out with members of a rival gang, do not speak out against the gang that controls your area, do not refuse to join your neighbourhood’s gang or to become the “girlfriend” of one of the leaders, pay the “taxes” imposed by the gang.

The penalty for breaking the rules? Death.

According to the United Nations Refugee Agency, the number of asylum applications made around the world by people from El Salvador, Honduras and Guatemala increased by nearly 600% between 2010 and 2015.

But instead of providing the protection these people are entitled to under international law, Mexico and the USA – where most flee to – have been increasingly pushing them back to the same mortal danger they were trying to escape from.

Between 2010 and 2015 alone, there was a 145% increase in the number of deportations from Mexico to Honduras.

Once back in their countries, refugees find themselves alone, without any form of meaningful protection from the government, facing the same gangs that terrorized them for years.

Since taking office last month, US President Trump has failed to make any reference to the hundreds of thousands of refugees from Central America who travel through Mexico to the USA in search for safety. But his vision of a US-Mexico border wall and other policies are likely to have lethal consequences for many seeking a path out of the deadly violence endemic to their Central American homelands.

As part of a raft of Executive Orders he signed in his first week at the White House, President Trump has made it exponentially more difficult for those fleeing extreme violence to find a safe place to call home – including by halting the Central American Minors scheme, set up by President Obama in 2014 to help children from violence-torn countries such as Honduras and El Salvador.

By shutting the door to refugees, Trump is effectively condemning them to a life of terror and violence.

Failing to take action to protect refugees is not going to stop people from embarking on these dangerous journeys, it will just put them at heightened risk – pushing them to repeatedly attempt the perilous journey in search of safety.

This is a summary of report, for more details go to: https://www.amnesty.org/en/latest/news/2017/02/how-trump-s-border-wall-would-lock-refugees-in-a-life-of-violence-and-fear/ 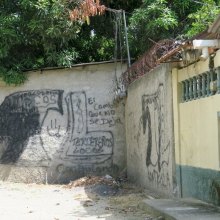