Letters are not case-sensitive
Send
"Israel’s administrative detention which is predominately used to detain Palestinians without charge or trial is arbitrary and abusive" said Magdalena Mughrabi, Deputy Middle East and North Africa Director at Amnesty International

The Israeli authorities’ administrative detention of Muhammed al-Qiq, a Palestinian journalist is unjust and cruel, said Amnesty International after a military judge approved an order confirming his detention for three months, which can be renewed indefinitely.

Muhammed al-Qiq, who was placed in solitary confinement following his arrest, has been on hunger strike since 6 February in protest at his detention. According to his lawyer his health has deteriorated in recent weeks and he is in need of specialized medical care. Israel uses administrative detention to jail Palestinians indefinitely without charge or trial based on secret evidence.

“Today’s decision to approve the administrative detention of Muhammed al-Qiq is an affront to justice. Israel’s administrative detention which is predominately used to detain Palestinians without charge or trial is arbitrary and abusive. The Israeli authorities must end this practice, which itself can amount to cruel and inhuman treatment, once and for all,” said Magdalena Mughrabi, Deputy Director for the Middle East and North Africa at Amnesty International.

Muhammed al-Qiq’s lawyer who was able to visit him a week ago said he appeared frail, had lost a lot of weight and was suffering from back pain because of his dire detention conditions. After initially refusing his lawyer’s request for him to be transferred to hospital the Israeli authorities eventually transferred him to Ramleh prison medical centre last week.

“Instead of prolonging Muahmmed al-Qiq’s suffering in detention the Israeli authorities should either charge him with a legitimate criminal offence or release him. In the meantime he must be transferred to a civilian hospital to receive the specialized treatment he requires,” said Magdalena Mughrabi.

Muhammed al-Qiq was arrested by Israeli security forces on 15 January 2017 at a checkpoint near Ramallah while on his way home from a demonstration.

This is not the first time Muhammed al-Qiq has been held under an administrative detention order. He was arrested in November 2015 and held for seven months without charge or trial. He spent 94 days on hunger strike protesting his detention, his health sharply declined and he was eventually released from custody. His wife, Faiha, told Amnesty International that he is especially weak at the moment because his body has not fully recovered from the effects of his previous hunger strike. 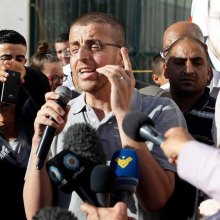