Letters are not case-sensitive
Send
With nearly 274,000 people displaced, Yemen’s Taiz is now among the crisis-torn country’s top five hosting governorates for such populations, a United Nations report has found.

For nearly 20 months, Taiz has been the centre of intense ground clashes, military confrontations and aerial strikes between warring parties in Yemen.

The International Organization for Migration (IOM) has initiated a system to track displacement from the major port city of Al Mokha, as accurate data is essential to plan an effective, efficient and impactful humanitarian response.

So far, at least 25,000 individuals have been reported as displaced from Al Mokha, according to IOM.

“This much-needed data has enabled the entire humanitarian community in Yemen to increase the amount and accuracy of vital support and protection it provides to affected populations,” said IOM Yemen Chief of Mission Laurent de Boeck in a press release.

Since the start of the conflict in March 2015, IOM has tracked up to 426,672 internally displaced persons and 78,258 returnees in the governorate of Taiz.

Earlier this week, Stephen O’Brien, the UN Emergency Coordinator, who is currently undertaking a mission in Yemen said that in an around Ibb and Taiz, he had met with families to hear their horrific stories of displacement.

“Running from violence, bombings and shelling, these people from Taiz and Mocha had left with nothing. It is now ordinary Yemenis, host communities and humanitarian actors providing lifesaving assistance and protection,” he said in a news release, stressing that with so many people malnourished and sick, aid is not enough.

“One thing is clear, though: there are no military solutions to this terrible conflict. Only sustainable peace can bring about the solutions, hope and future of Yemenis. I call on all parties to the conflict to come together and make peace. That is the best humanitarian assistance,” he said. 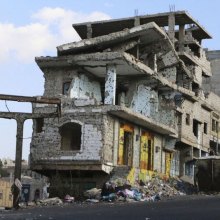