Letters are not case-sensitive
Send
Amid a spike in new displacement triggered by the Iraqi military offensive to recapture western Mosul, the United Nations refugee agency is setting up new camps and expanding existing ones to shelter new arrivals, many of whom are visibly traumatized, hungry and dehydrated.

According to the Office of the UN High Commissioner for Refugees (UNHCR), its newly opened Chamakor camp will help manage the up tic.

“[The camp] received its first 200 residents [yesterday] and more arrivals are expected [today] and through the week.” Cécile Pouilly, a spokesperson for the UN agency, said at a media briefing today at the UN Office at Geneva (UNOG).

“It is ready to immediately receive 6,600 people,” she added.

The UN agency is also building two additional camps – one to the east of Mosul and the other, south – for some 39,000 people and setting up 19 tented halls in the Iraqi Government-built Hammam al-Alil, that will serve as reception centres and transit area.

Ms. Pouilly also said that UNHCR is exploring expanding capacity in camps north of the city but is facing serious challenges finding suitable land to build the camps.

Hunger and insecurity have been cited as the key factors in the decision to flee by newly displaced families, who told the UN agency of armed groups attacking areas recently retaken by Iraqi Security Forces (ISF), causing sustained civilian casualties.

“The newest arrivals are in a desperate condition, visibly traumatized, hungry and dehydrated. Many arrived without shoes and wearing soaking clothes, having walked long distances to reach safety at government checkpoints,” said the UNHCR spokesperson.

“Some had left relatives behind, hoping to be reunited once they are able to find safer exit routes from west Mosul. Families recounted surviving on one meal a day – flour and water, sometimes supplemented by bread or tomato paste – over recent weeks.”

Currently there are 211,572 Iraqis displaced by the fighting in Mosul, with over 50,000 added since the beginning of the latest operations in west Mosul, launched on 19 February. 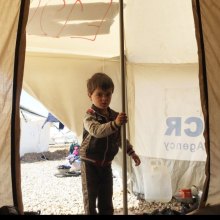