Letters are not case-sensitive
Send
With tens of thousands of civilians forced to flee their homes following a spike in fighting across western and central Yemen, the United Nations refugee agency appealed for more international support, as well as unrestricted access within the country so that it can reach those now facing “abysmal conditions.”

According to the Office of the UN High Commissioner for Refugees (UNHCR), more than 62,000 Yemenis have been displaced over the last six weeks.

“A number of those displaced, including many children, have been reported as suffering from malnutrition, while others are distressed and in need of psycho-social assistance,” William Spindler, a spokesperson for the UN agency, told journalists at a media briefing at the UN Office at Geneva (UNOG).

“Many of those displaced are in urgent need of food, shelter and medicine and lack adequate water and sanitation facilities. A number of women also reported psychological distress and malnutrition.”

Facing danger from both the sky and the land

A 28-year-old mother of three who fled her home in Al Mokha (western Yemen) with her husband and children, and another family, crammed into a vehicle for a 150-kilometre, eight hour journey.

This is what she said: "We faced danger from both the sky and the land. We hid at home for most of the time, but when we were nearly killed and our house damaged by the fighting, we just had to leave. We couldn’t take anything with us – no food, clothes or any belongings because there was hardly any space for the people. When we arrived in Hudaydah we had nothing, but the community have been so generous. Even though they are also suffering, they gave us a place to stay and helped us out. Life is too hard. We don’t have enough food and water and we are sick. Many people and their children have infections, and fear has made our bodies and minds weak. "

Together with its partners, UNHCR has stepped up their efforts to help those newly displaced. The response, however, has been hampered by ongoing fighting and restricted access such as in Taiz governorate, which has the highest number of recent displaced.

“[We] continue to advocate for unfettered access and [are] trying to mobilize a response with all national actors on the ground,” he stressed.

At the same time, local host communities are also stretched to capacity and are buckling under the strain of hosting additional, newly displaced populations.

Not including the tens of thousands newly displaced, the governorates of Taiz, Hudaydah and Ibb between them host 25 per cent of Yemen’s total displaced population – more than half a million individuals.

Budget shortfall by 93 per cent

UNHCR too is struggling to cope with the crisis and calling for international support to help its efforts.

Its 2017 budget for Yemen, so far, is only seven per cent funded, leaving it with resources only sufficient to deal with urgent emergency needs and restricted to new waves of displacement.

“We are no longer able to support regular distributions including to internally displaced Yemenis living in collective centres and informal settlements,” said Mr. Spindler.

Before the latest surge, Yemen already had more than two million internally displaced people and one million who provisionally returned to their places of origin but still needing humanitarian assistance. 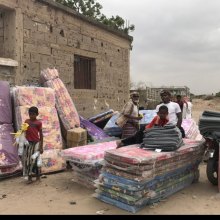