Letters are not case-sensitive
Send
As the Nowruz approaches, Iranians make attempt to renew their living environment. This is done by cleaning their houses spick and span in what is called “khooneh tekooni”. Iranians spend the few weeks to the New Year doing this. They remove the carpets, wash them, mop the floor, the walls, furniture, and everything else.

Nowruz marks the first day of spring and is celebrated on the day of the astronomical vernal equinox, which usually occurs on 21 March. It is celebrated as the beginning of the new year by more than 300 million people all around the world and has been celebrated for over 3000 years in the Balkans, the Black Sea Basin, the Caucasus, Central Asia, the Middle East and other regions.

Celebrating Nowruz means the affirmation of life in harmony with nature, awareness of the inseparable link between constructive labour and natural cycles of renewal and a solicitous and respectful attitude towards natural sources of life.

Traditionally, Iranians would break a clay vase as a symbol of leaving the old and going for the new in anticipation of the New Year. They would also rub their copper utensils white. By doing these things, the Iranians believed, they removed the old spirit and the bad phantoms and unrestful spirits from the house.

People in Iran start preparing for Nowruz with a major spring-cleaning of their house and the purchase of new clothes to wear for the New Year, as well the purchase of flowers.

In association with the "rebirth of nature", extensive spring cleaning is a national tradition observed by almost every household in Iran. This is also extended to personal attire, and it is customary to buy at least one set of new clothes.

On the day of Nowruz, they dress in their new and best clothes. They decorate the doors and windows with garlands of roses and jasmines. Flowers are known for their delicate nature and need of care where you can find only in a well-kept house.

Some experts believe the house cleaning is a tradition passed down by Zoroastrianism. Javad Ensafi, researcher, in a book titled “Navid e Bahar” says:
Cleaning the house is yet another ritual with Iranians in anticipation of the New Year. Even in some villages they used to whitewash their houses and make everything new.

Throwing out old furniture and breaking old utensils were other things they did to prepare for the New Year in what they believed would ward off bad spirits and omens. Science was later to find that the cracks in utensils and equipment were the perfect place for microbes to grow.

The ancient Iranians believed that Satan and bad spirits resided in the dark corners of the house. That was a reason they cleaned the house through before Nowcruz. They then attended to their own bodies, shaving, getting a haircut, doing their nails, and wearing new clothes.

The most important lesson to be drawn from the “khooneh tekooni” ritual of Iranians is that they had found what would cause health problems if they did not clean their houses and living environment periodically. The cleaning ritual, therefore, provided a basis for a much needed health routine. 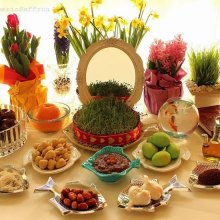 'Every migrant is a human being with human rights,' says UN chief on International Day united nations