Letters are not case-sensitive
Send
The United Nations and its humanitarian partners in Iraq are scrambling to get emergency sites ready amidst a mass exodus from West Mosul, with nearly 700,000 civilians still living in the city where Iraqi forces are fighting the Islamic State of Iraq and the Levant (ISIL/Da’esh), according to the UN Humanitarian Coordinator in the country.

“The number of people is higher than expected,” Lise Grande told journalist in New York via videoconference from Iraq. “If the pace accelerates further, it’s going to stretch us to the breaking point.”

She added that if 50,000 civilians flee in a single day, the current system would not work properly. The UN and its partners have already started to set up large warehouse size structures which will house the families as they await “the dignified support they deserve,” said Ms. Grande.

According to the latest figures she disclosed, there are still an estimated 650,000 to 680,000 civilians in Mosul’s Old City.

“We fear the civilians there might be trapped in an extremely difficult situation. Families that chose to stay are at risk, families that leave are also at risk,” said Ms. Grande, noting that ISIL is targeting people who try to flee what is expected to be a prolonged siege.

Meanwhile, people who stay are without food and water. No steady supplies have been able to reach the city since mid-November, Ms. Grande said.

Families with resources are trying to trade what they can to eat even one meal a day, according to stories from people who were able to flee, while some people go for days without meals.

“Whether you stay or whether you go there are significant risks to the civilians,” Ms. Grande noted. “The greatest problem is water.”

When the military operation to oust terrorists from the area began on 17 October 2016, some 1.5 million civilians were living in Mosul. In the eastern part of the city, some 345,000 were displaced – of whom about 70,000 returned home because “conditions are ready and safe to do so,” journalists were told today.

The western part of Mosul is more densely populated, however. There is hope that civilian casualties will be limited because the Iraqi forces adopted a so-called “humanitarian concept of operations” which prohibits artillery strikes, requires civilians to remain in their homes, and provides humanitarian exit corridors wherever necessary.

Those who do flee are screened at the Hammam al Alil site, with the men separated from the women and children. Once interrogated and cleared, the families are reunited.

The senior UN official said the Organization and its humanitarian partners are working “around the clock” in support of the Iraqi Government to quickly get sites ready for the displaced civilians. Aid workers receive the site, set up tents and mattresses, clear and construct sanitation areas, and then transfer the areas to Iraqi military, who move in civilians on civilian buses.

Ms. Grande said that there are concerns about water and sanitation at the screening sites, and that the Government has asked for additional support to help it correct those conditions.

The UN and its partners are supplying food, water and other services to the sites, with more than 1.4 million people reached.

Coordination between the UN, its partners and the Government is good, but “complicated,” Ms. Grande acknowledged, noting that the UN is part of 19 daily coordination forums, which include a range from local to national officials. 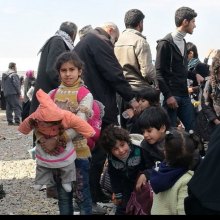