Letters are not case-sensitive
Send
Children have the power to bring Iraq out of conflicts and into a peaceful future, the Executive Director of the United Nations Children’s Fund (UNICEF) has said.

Anthony Lake wrapped up his visit to the crisis-torn Middle Eastern country on Wednesday, 22 March. Upon finishing his visit, Mr. Lake said: “I leave Iraq at a time when the country is facing significant challenges and opportunities. Yet everywhere I visited – East Mosul, Baghdad, Fallujah, Erbil – children and their families told me of their dreams and their determination to make them real.”

Some 1.4 million children have been displaced by the violence in Iraq and 200,000 children remain trapped in Mosul where heavy fighting between Government forces and the Islamic State of Iraq and the Levant (ISIL/Da’esh), persists.

“UNICEF is working hard to provide children and families affected by the crisis in Mosul with lifesaving supplies of water, access to sanitation facilities, psychosocial support and the opportunity to get back to learning as soon as possible,” stated Mr. Lake.

The UNICEF chief visited schools in Fallujah that had reopened amid the debris of war and met with students who said they had dreams of being engineers and doctors.

“We are working with the Government of Iraq to provide all children in Iraq, with the resources they need to reach those dreams ¬– whether that means new classrooms, notebooks or accelerated learning programmes,” he said.

“Because it is these students who, if they have the skills in their heads and healing in their hearts, will move the country from the conflicts of the past towards a peaceful future,” he emphasized. 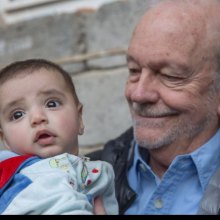