Letters are not case-sensitive
Send
An estimated 400,000 Iraqi civilians are trapped in Mosul's Old City as fighting intensifies and people continue to flee, the United Nations refugee agency representative warned.

“The worst is yet to come,” said Bruno Geddo, the Representative of the UN Refugee Agency (UNHCR) in Iraq.

Speaking by phone, Mr. Geddo said the fighting in the west has been more intense than in the less densely populated east of the city, where the battle ended in January.

“People are stuck between a rock and a hard place,” he added. “There's fighting shelling, bombing.”

When people try to flee, extremists shoot them. Some have tried to leave during prayers or under cover of fog at first light – but were killed, Mr. Geddo said.

Meanwhile, life in the Old City is becoming impossible with a lack of food, clean water or fuel, Mr. Geddo said.

Meeting with civilians at the UNHCR transit and reception centre at Hammam al-Alil, outside of the city centre, Mr. Geddo said the number of people moving through has “surged” in recent days with up to 12,000 people arriving daily.

Some 340,000 people have been displaced since the fighting in Mosul started last October. Of those, about 72,000 have returned home.

The UN representative called on all those fighting to allow civilians to leave areas of conflict for safer zones, and no one should be forced to come back home.

“Liberating Mosul is necessary but not sufficient,” Mr. Geddo said. “We equally have to get it right with the protection of civilians and in the humanitarian response.” 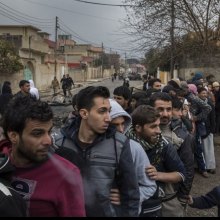