Letters are not case-sensitive
Send
In African and Middle Eastern countries facing famine, unsafe water is as dangerous for severely malnourished children as lack of food, the United Nations Children's Fund (UNICEF) warned, noting that nearly 27 million people are at risk in northeast Nigeria, Somalia, South Sudan and Yemen.

“Unsafe water can cause malnutrition or make it worse, no matter how much food a malnourished child eats, he or she will not get better if the water they are drinking is not safe,” said Manuel Fontaine, UNICEF Director of Emergency Programmes.

The UN agency is warning that a combination of malnutrition, dirty water and poor sanitation sets off a vicious cycle from which many children never recover.

In northeast Nigeria, where the fight on Boko Haram damaged or destroyed 75 per cent of water and sanitation infrastructure, some 3.8 million people have no access to safe water, according to UNICEF.

In Somalia, about one-third of the population is expected to need access to water and sanitation in the coming weeks, according to the UN agency, pushing the current needs from 3.3 million to 4.5 million of people.

Some 5.1 million people lack safe water, sanitation and hygiene in South Sudan, where half of the water points in the country have been damaged or destroyed.

The fighting in Yemen has displaced at least 14.5 million people, leaving them without basic sanitation and adequate drinking water, UNICEF cautioned. According to the latest figures, almost 2 million children are at risk of diarrheal diseases which, even before the conflict, were the second leading cause of death among children under the age of five.

UNICEF is working with other UN agencies, national authorities and local partners to provide safe water and sanitation to children.

“But without an end to the conflicts plaguing these countries, without sustainable and unimpeded access to the children in need of support and without more resources, even our best efforts will not be enough,” Mr. Fontaine said. 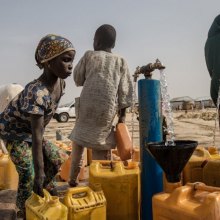