Letters are not case-sensitive
Send
The African Union (AU) and the United Nations are actively discussing with the Government of Sudan how best to configure a strategy for AU-UN peacekeeping to eventually leave Darfur, the head of that operation said on April 4th.

“In view of the current circumstances in Darfur, a pragmatic reconfiguration of UNAMID [the AU-UN Hybrid Operation in Darfur] will become necessary and the AU and UN will have to focus on how best that could be done without compromising the gains thus far made,” the Joint Special Representative, Jeremiah Mamabolo, told the Security Council.

He said that from 5 to 17 March, UNAMID received an AU-UN strategic review team, which met with the Government of Sudan in Khartoum and Darfur, and travelled throughout the Darfur region. UNAMID awaits the outcome of these deliberations.

The three strategic priorities established by the Council in 2014 continue to provide a framework within which UNAMID implements its mandate to protect civilians, mitigate inter-communal conflicts and mediate between the Government and the non-signatory armed movements.

“The Darfur of today is a very different place from what this region was in 2003, when the armed conflict began, and from that of a year ago,” Mr. Mamabolo said, noting that fighting between Sudanese Government forces and the main three non-signatory armed movements has considerably diminished.

The past three months have also witnessed a continued reduction in the number of inter-communal security incidents, in particular as a result of the more effective involvement of the native administrations and the impact of security measures by State Governments, leading to an increased number of peace agreements.

Further, UNAMID has not seen any new displacement in 2017. Cooperation with the Government has noticeably improved in terms of humanitarian access. UNAMID and the UN country team have repeatedly been able to visit previously off-limits areas in Jebel Marra while UN humanitarian partners are commencing regular helicopter flights to Golo.

However, efforts by the AU High-level Implementation Panel (AUHIP) to get warring parties to sign a cessation of hostilities agreement and start direct negotiations towards an inclusive peace agreement to end the conflict have remained inconclusive, Mr. Mamabolo said.

Although Sudan Liberation Army/Abdul Wahid al-Nur (SLA/AW) is no longer capable of mounting and sustaining significant military operations, it continues to refuse to join the peace process and seems to want to continue to fight, he explained.

“We would like to appeal to this Council and those with influence and leverage on him to persuade him to recognize the importance of a political settlement and desist from bringing more suffering to the very people that he professes to represent,” Mr. Mamabolo said. 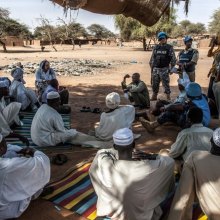 On International Day, UN cites 'duty of care towards the environment' in peacetime and during conflict Peace ,conflict ,human rights