Letters are not case-sensitive
Send
Host communities and aid agencies in Uganda are struggling to feed and shelter new refugees who have been displaced following a spike in violence in parts of neighbouring South Sudan's Eastern Equatoria province, the United Nations refugee agency said.

According to estimates, some 6,000 newly displaced have arrived in Lamwo district (northern Uganda) since Monday, after an attack on the town of Pajok, some 15 kilometres (about 9.5 miles) across the border, and there are fears that number could rise as fighting is reported in the bordering towns of Magwi and Oboo.

Describing the incident in Pajok as a “horrible attack”, Babar Baloch, a spokesperson for the Office of the UN High Commissioner for Refugees (UNHCR) told journalists at a regular media briefing in Geneva that refugees claimed that the town came under an indiscriminate attack by the South Sudan armed forces.

“[They] reported witnessing their loved ones shot dead at a close range, with many arrested or slaughtered, including children. Families fled in different directions; the elderly and disabled who could not run were shot dead,” he added.

Furthermore, there are reports that many people are still hiding in the bush trying to find their way to safety and that their homes and properties were looted and burned.

Main roads out of the town are also reportedly blocked by armed groups, noted the UNHCR spokesperson.

UNHCR staff in northern Uganda are working to help women, children, elderly, and the disabled who are in dire need of immediate humanitarian assistance and trying to provide them with food, shelter, water and medical care but are reporting severe shortage of resources.

This January, in light of the worsening crisis in the world's youngest nation, the funding appeal for the 'South Sudan Situation' – that includes support for Uganda, Ethiopia, Sudan, Kenya, Democratic Republic of the Congo, Central African Republic as well as South Sudan – was revised to nearly $782 million, up nearly $298 million (61 per cent) from the original appeal.

However, it is only 11 per cent funded.

Uganda currently hosts more than 832,000 refugees from South Sudan and its approach in dealing with refugees has been hailed as the most progressive, promoting self-reliance of refugees and their hosts, but the chronic under-funding is putting such relief activities at risk. 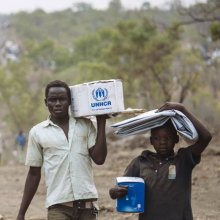 ‘We must be resourced to respond, protect and deliver’ for people of Syria, UN aid chief refugee ,unhcr ,human rights ,Human Rights Violations