Letters are not case-sensitive
Send
In the wake of yet another dire turn in the Syrian crisis, the United States and the Russian Federation “must find a way to work together” to stabilize the situation and support the political process, the United Nations envoy for the war-torn country told the Security Council on 12 April.

In his briefing, Staffan de Mistura, the UN Special Envoy for Syria added that last week’s reported chemical weapons attack, the subsequent airstrikes by the US and intensified fighting on the ground have put the fragile peace process is in “grave danger.”

“This is a time for clear-thinking, strategy, imagination, cooperation,” said Mr. de Mistura.

“We must all resolve that the time has come where the intra-Syrian talks move beyond preparatory discussions and into the real heart of the matter, across all four baskets, to secure a meaningful negotiated transition package,” he added.

Prior to the reported chemical attack in Khan Shaykhun area of Idlib, modest but incremental progress were made, the UN envoy noted, highlighting that though there no breakthroughs, there were also no breakdowns. The most recent round of talks, facilitated by the UN in Geneva, wrapped up two weeks ago.

However, the reported attack and subsequent events have placed the country between two paths: one leading more death, destruction and regional and international divisions; and the other of real de-escalation and ceasefire, added Mr. de Mistura.

He informed the 15-member Security Council of his appeals to Russia, Turkey and Iran – the guarantors of the Astana ceasefire – and urged all with influence over the parties to the conflict to restore the credibility of the ceasefire, and to ensure that the UN can reach the millions who are trapped in besieged and other hard to reach areas.

The Security Council briefing comes as the US Secretary of State Rex Tillerson visits Moscow.

Hailing the visit and the discussions, Mr. de Mistura called on both the US and Russia – the co-Chairs of the International Syria Support Group (ISSG) – to recognize their common interests and responsibilities and find a way to work together to stabilize the situation, in a deliberate, realistic and concerted way, in support of the political process.

The ISSG established respective taskforces on humanitarian aid delivery and a wider ceasefire that have been meeting separately since early 2016 on a way forward in the crisis. In addition to Russia and the US (the co-chairs of the taskforces), the ISSG also comprises the UN, the Arab League, the European Union and 16 other countries.

Concluding his briefing, the UN Special Envoy reiterated that there are no military solutions to the strife in the war-ravaged country.

“You have heard it countless times, but I will say it again: there can only be a political solution to this bloody conflict […] regardless of what some say or believe,” he expressed, noting that this is what Syrians from all walks of life also say and something that the Security Council had agreed upon. 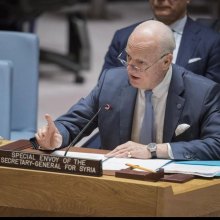 ‘We must be resourced to respond, protect and deliver’ for people of Syria, UN aid chief Syria ,Peace ,human rights ,Human Rights Violations