Letters are not case-sensitive
Send
NEW YORK (22 October 2014) – The United Nations Special Rapporteur on extrajudicial, summary or arbitrary executions, Christof Heyns, today raised concern about the increasing use of technologies that depersonalise the use of force –including armed drones– not only on the battlefield, but also in domestic law enforcement. 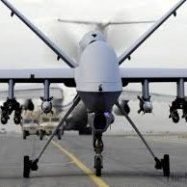 NEW YORK (22 October 2014) – The United Nations Special Rapporteur on extrajudicial, summary or arbitrary executions, Christof Heyns, today raised concern about the increasing use of technologies that depersonalise the use of force –including armed drones– not only on the battlefield, but also in domestic law enforcement.
During the presentation of his report to the UN General Assembly on the use of armed drones for law enforcement, Mr. Heyns provided examples of such technology that is for sale worldwide, to be used by the police and private security firms to control demonstrations, guard strategic buildings, and to hunt down escapees.“An armed drone, controlled by a human from a distance, can hardly do what police officers are supposed to do – use the minimum force required by the circumstances, assist those who need help, etc.,” the human rights expert said. “The situation becomes even more problematic when the police use increasingly autonomous weapons – that is, weapons that have on board computers which decide on the use of force.”According to the independent expert’s report, the protection of rights such as the right to life and personal security, and of human dignity weighs against the police outsourcing their work to machines, if this means the police no longer have meaningful control. “The decreased personal involvement of police officers in the deployment of force raises the question, among others, of who is responsible if things go wrong,” he stressed.“The requirement under human rights law is not merely to distinguish between lethal and any non-lethal force. Even if it is unlikely to lead to death, the force used must still be the minimum required by the circumstances of each case,” Mr. Heyns said pointing to an increasing number of cases in which individuals have been killed or seriously injured as a result of improper use of supposedly ‘less lethal’ weapons. “Questions that are asked about the use of armed drones and autonomous systems on the battlefield intensify when they are used in ordinary policing,” the Special Rapporteur noted. “The relationship between the State and those under its protection is very different from its relationship with those it regards as its enemies during armed conflict.”
It is to be noted that the Organization for Defending Victims of Violence (ODVV) has attended the panel on the use of armed drones in the 27th session of the Human Rights Council, condemning the use of drones as means of targeted killings, regretting the impunity of those who remotely control the drones if a crime is committed,
you can see the ODVV statement below :
Panel on the Use of Remotely Piloted Aircraft or Armed Drones in Counter-Terrorism and Military Operations
(HRC Resolution 25/22)
Armed drones have been increasingly used as a means for targeted killings in recent years. A targeted killing in military operations is the use of lethal force against a selected human being who is not in the physical custody of the targeting entity, with the intent and deliberation to kill. Targeted killings cannot be considered legal, because the killing of an individual human being can never be considered as the only goal of a military operation. According to Article 6 of ICCPR every human being has the inherent right to life and no one shall be arbitrarily deprived of his life. According to International Law killing can only be considered legal when it can prevent a threat to the life of other people, only on the condition that the threat can be prevented by no other means.According to international lawyers, drone killings may be lawful in the context of authorized armed conflict, however, the use of drones “far from the battle zone” is highly questionable legally. And “Outside the context of armed conflict, the use of drones for targeted killing is almost never likely to be legal.”An illegal killing can be considered as a violation of the “right to life”, the widespread killing of civilians in drone strikes may well constitute war crimes. Expressing serious concerns over the increasing use of drone attacks, the Organization for Defending Victims of Violence (ODVV) condemns drone attacks on vulnerable civilians and calls on the Human Right Council to adopt more effective accountability mechanisms for human right violations using armed drones, considering the regrettable impunity of those who remotely control the drones and commit targeted killing of civilians.