Letters are not case-sensitive
Send
In the wake of the recent attack on an evacuation convoy near Aleppo, Syria, and the purported use of chemical weapons in southern Idlib, the United Nations child rights body called for investigations into all attacks on children in the country and for bringing the perpetrators to justice.

“Children are bearing the brunt of horrific attacks in Syria,” said Benyam Dawit Mezmur, Committee Chair of the UN Committee on the Rights of the Child.

“I urge all relevant actors to investigate these abhorrent acts and bring their perpetrators to justice, including by providing full support to the Organization for the Prohibition of Chemical Weapons’ fact-finding mission, the independent Joint Investigative Mechanism, the Syria Commission of Inquiry and the International, Impartial and Independent Mechanism on Syria,” Mr. Mezmur added.

He stressed that States Parties to the Convention on the Rights of the Child, which includes Syria, as well as other actors, have an obligation to prevent violations of international human rights and humanitarian laws and to take all possible measures to minimize the impact of the conflict in Syria on children.

Children in Syria “have been killed, maimed, subjected to sexual violence and traumatized,” Mr. Mezmur said.

About 2.4 million children have been displaced and some 280,000 are in besieged areas, according to UN figures the independent expert cited.

Most recently, at least 67 children were killed in an attack near Rashideen, western rural Aleppo Governorate, targeting a convoy carrying people from the besieged Syrian towns of Fuha and Kefraya to Government-controlled areas. According to the Office of the UN High Commissioner for Human Rights (OHCHR), video shows children gathering around a person giving out sweets just prior to the explosion. 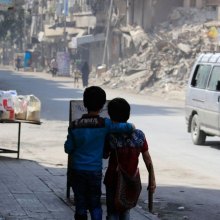