Letters are not case-sensitive
Send
A lack of accountability for crimes perpetrated during the ongoing conflict in South Sudan remains one of the country's “biggest challenges,” the Human Rights Director for the United Nations Mission (UNMISS) said as he wrapped up a visit to the north-western Wau region.

Violence earlier in April led to the death of 19 Sudan People's Liberation Army (SPLA) soldiers and at least 28 civilians, according to State officials. The killing of civilians in Wau town followed the ambush and killing of the SPLA soldiers by suspected SPLA-In Opposition fighters.

According to a news release, the Human Rights Division of UNMISS has interviewed 43 individuals, including eight women and two children, from 11 April, to collect information about alleged human rights violations perpetrated by government forces and aligned armed groups in Wau town on 10 April.

“I can confirm that, as of Sunday, nobody is being detained in connection with this attack against civilians,” said Eugene Nindorera. “I talked to victims and witnesses and was shaken to hear their testimonies of how they had to flee their houses after being attacked. It's more important than ever before that people are held accountable for the crimes they have committed.”

He further confirmed after meeting the Governor of Wau state that the Governor had established a committee to produce a comprehensive report to determine the motive for the attacks and identify the perpetrators in order to hold them accountable.

“I welcome this move,” Mr. Nindorera said, “and I encourage Governor Andrea Mayar Acho to exert his authority to ensure that people are held responsible for the crimes they have committed.”

Meanwhile, UNMISS has confirmed that by Thursday (20 April) the protection of civilians site adjacent to the UNMISS base in Wau had registered some 17,000 new arrivals, mainly women and children, while around 5,000 people had sought sanctuary inside the compound of the Wau Catholic Church. The influx of newly displaced people has led to over-crowding and pressure on humanitarian services. 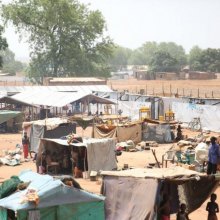