Letters are not case-sensitive
Send
Noting increases in number of migrants, including children, attempting to reach European shores using the Central Mediterranean route, and consequent rise in number of deaths, the United Nations Children's Fund (UNICEF) has called for safe and legal pathways for those who are fleeing conflict, poverty and depravation.

According to UNICEF estimates, at least 849 people, including more than 150 children, perished at sea while trying to make the perilous crossing since January this year.

“It is deeply concerning that vulnerable people, including thousands of children, are risking their lives to reach Europe's shores using this incredibly dangerous route,” Afshan Khan, the UNICEF Regional Director and Special Coordinator for the Refugee and Migrant Crisis in Europe, said in a news released on 21 April.

Since the start of the year, nearly 37,000 refugees and migrants – 13 per cent of them children – have reached Italy by sea via the Central Mediterranean. This is an increase of 42 per cent compared to the same time period last year.

UNICEF also noted that recent good weather and calmer waters in the Mediterranean have been accompanied by a surge in refugees and migrants attempting to cross. During the Easter weekend (last weekend) alone, more than 8,300 were rescued from the sea between Libya and Italy. At least eight migrants were reported to have drowned over the weekend.

“This is further evidence that when safe and legal pathways to migration are cut off, desperate children and families will do whatever they can to flee conflict, poverty and depravation,” noted Ms. Khan.

As part of its global policy for children on the move, the UN agency has been calling for more action to protect child refugees and migrants, particularly unaccompanied children; end the detention of children seeking refugee status or migrating; and to promote measures to combat xenophobia, discrimination and marginalization in countries of transit and destination.

It has also underlined the need to keep families together as the best way to protect children and give children legal status; to ensure that all refugee and migrant children have opportunities to learn, access to health care and other quality services; and to address the underlying causes of large scale movements of refugees and migrants. 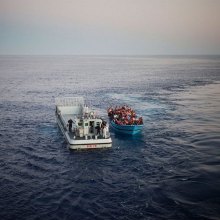