Letters are not case-sensitive
Send
With nearly two-thirds of war-torn Yemen – about 19 million people – in need of emergency support, the international community raised $1.1 billion at a pledging event in Geneva to aid what the United Nations chief calls “the world’s largest hunger crisis.”

The aim was to bridge a funding gap in the 2017 humanitarian appeal of $2.1 billion. Prior to the conference, only about 15 per cent had been met.

“We are witnessing the starving and the crippling of an entire generation. We must act now, to save lives,” said Secretary-General António Guterres, who presided over the opening of the High-level Pledging Event on the humanitarian crisis in Yemen, alongside the Foreign Affairs Ministers of Switzerland and Sweden.

He noted that the “man-made crisis” had devastated the economy of a country that was “pitifully poor” even before the current conflict, and forced three million people from their homes – leaving many being unable to earn a living or grow crops.

“Some 17 million are food-insecure, making this the world’s largest hunger crisis,” Mr. Guterres said, highlighting a situation worsened by import restrictions and the destruction of port facilities.

Calling particular attention to children at risk in Yemen, Mr. Guterres said that on average, one child under the age of five dies of preventable causes every 10 minutes in Yemen.

The exact pledges for the day totalled $1,098,466,634, “a remarkable success” according to the Secretary-General, who expressed optimism at the close of the conference that the full amount required will materialize in the coming months.

The next challenge to overcome would be to lift access restrictions throughout Yemen. Mr. Guterres urged parties of the conflict to respect international humanitarian law and allow unhindered movement of humanitarian actors to reach those in need.

“Access is the key for the success of this pledging conference,” he said, calling also for the necessary infrastructure to be allowed to operate in normal conditions and for goods to be imported and distributed.

Both officials stressed that funding alone will not reverse the fortunes of the millions of people impacted. They called for a cessation of hostilities and a political settlement, with talks facilitated by the Secretary-General’s Special Envoy Ismail Ould Cheikh Ahmed.

Between famine and starvation lies disease

More than two years of fighting has destroyed the country’s infrastructure – including attacks that targeted civilians. Some 325 attacks have been verified on health facilities, schools, markets and other infrastructure.

As the violence rose, the ability to aid those in need has been hampered. The disruption of health services has been “severe,” Margaret Chan, Director-General of the World Health Organization (WHO), told the pledging event.

Less than half of the country’s health facilities are functioning and the majority of health providers, if they stayed, have not been paid since at least August 2016.

She warned also that infections would increase as the population grows more hungry.

This is summary of the news, for more details : http://www.un.org/apps/news/story.asp?NewsID=56625#.WQDdmNxdLIU 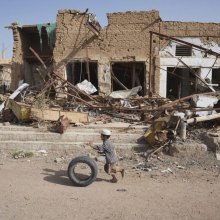