Letters are not case-sensitive
Send
Saudi Arabia must stop using its anti-terror law to violate the right to free speech of its people, and end the use of torture terrorist suspects during investigations, a United Nations human rights expert urged at the end of his mission to the country.

"I am concerned about the unacceptably broad definition of terrorism and the use of Saudi Arabia's 2014 counter-terrorism law and other national security provisions against human rights defenders, writers, bloggers, journalists and other peaceful critics,” Ben Emmerson, the Special Rapporteur on human rights and counter-terrorism, said in a statement summing up his five-day mission .

Arguing the legislation failing to comply with international human rights norms, Mr. Emmerson called on the Government to timely review the definition of terrorism.

Also expressing serious concern over allegations of torture made by terrorism suspects, lawyers and human rights defenders not resulting in thorough investigations, the human rights expert stressed the importance of establishing an independent mechanism immediately to review all current cases, especially regarding the use of the death penalty following the proceedings.

“The lack of effective guarantees against ill-treatment during investigation offers the potential for torture and other forms of abuse of power,” said Mr. Emmerson, adding that “I have handed the Government a list of priority cases for urgent review.”

The special rapporteur also voiced concerns about Saudi Arabia's extra-territorial counter-terrorism involvement in Yemen and Syria, urging for greater transparency on civilian casualties in such operations and recalling the Government's commitment to halt all terrorist financing.

Despite such observations and warnings, Mr. Emmerson noted many positive efforts made by the Government. Among others were assisting victims of terrorism through comprehensive financial, housing and psycho-social support and detaining terrorist suspects with care and medical and recreational facilities.

Special Rapporteurs are appointed by the Geneva-based UN Human Rights Council to examine and report back on a specific human rights theme or a country situation. The positions are honorary and the experts are not UN staff, nor are they paid for their work. 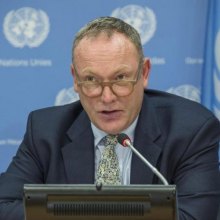 Think of those fleeing Syria and elsewhere not with fear but with open arms and open heart – UN agency chief Human Rights Violations ,Syria ,Yemen