Letters are not case-sensitive
Send
Secretary-General António Guterres strongly condemned yesterday's horrific terrorist attack targeting crowd gathering for a concert in Manchester, the United Kingdom, while the United Nations Security Council held a moment of silence to honor the victims.

According to media reports, a suicide bombing killed at least 22 people and injured many at Manchester Arena, at the end of a concert by American pop star Ariana Grande. The Islamic State in Iraq and the Levant (ISIL/Da'esh) reportedly claimed responsibility for the attack.

Mr. Guterres conveys “his profound sympathy and solidarity with the people and Government of the United Kingdom” and “his condolences to the families and friends of those killed, and wishes the injured an early and full recovery,” said a statement issued by the Secretary-General's Spokesman Stéphane Dujarric.

“The Secretary-General hopes that those who are responsible for this despicable attack will be swiftly found and bought to justice,” it added.

Also, the Security Council issued a statement to the press, condemning “in the strongest terms the barbaric and cowardly terrorist attack” while expressing condolences to the families of the victims, as well as to the Government of the United Kingdom.

“The members of the Security Council reaffirmed that terrorism in all its forms and manifestations constitutes one of the most serious threats to international peace and security,” the statement said, underlining the need to bring the perpetrators, organisers, financiers and sponsors of these reprehensible acts to justice.

Ahead of their meetings yesterday, Council members also held a moment of silence to honor the victims. 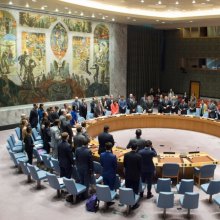