Letters are not case-sensitive
Send
Citing Iraqi Government figures, the United Nations migration agency warned that the number of people fleeing West Mosul is soaring – on 18 May, hitting a peak when some 16,100 transited through the Hamam al-Alil screening site – the largest official daily movement of people since the October 2016 military offence began.

“The fact that huge numbers of Iraqis continue to flee West Mosul, despite the dangers involved, is a testament of both the the dire situation inside, and the enormous task ahead of us to alleviate the suffering of IDPs [internally displaced persons],” said the International Organization for Migration (IOM) Iraq Chief of Mission, Thomas Lothar Weiss.

According to the military and camp management at Hamam al-Alil, an average of 10,000 individuals fleeing West Mosul arrives at the transit zone on a daily basis.

With gruelling high temperatures during the day, most leave at night, walking several hours before reaching the nearest military checkpoints. From there, they are transported to Hamam al-Alil, south of Mosul, on the western banks of the Euphrates, which has become the transit hub for the tens of thousands of families fleeing the West Mosul conflict.

The camp adjacent to the site is at full capacity, and many families are being moved to other camps, with large numbers opting to go to areas east of Mosul where they stay with families, friends or in rental accommodations, says IOM.

According to the Iraqi Government, cumulatively, more than 742,000 people have been displaced from Mosul and its surrounding areas since 2016, when the military offense to oust extremists began, including 566,000 individuals from Western Mosul since mid-February. More than 73,000 Iraqis were displaced last week alone.

As of 23 May, IOM's Displacement Tracking Matrix has tracked and located more than 377,000 individuals – some 63,000 families – currently sheltering in camps and emergency sites, including people living in host communities, informal sites and rented homes.

Protection of civilian lives is a legal and moral duty above all other objectives
Meanwhile, the UN Under-Secretary-General for Humanitarian Affairs, Stephen O’Brien expressed deep concern for the safety of civilians behind ISIL lines in Western Mosul.

“Although the UN is not present in the areas where fighting is occurring, we have received very disturbing reports of families being shut inside booby-trapped homes and of children being deliberately targeted by snipers,” he said, emphasizing that families in the city still lack access to clean water and medicine and many have only limited access to food.

Yesterday, the Government asked civilians in districts surrounding and inside the Old City to leave and seek safety across government lines. “We don’t know for sure how many civilians are still in ISIL-held districts, but as many as 200,000 additional people may try to leave in coming days,” he explained.

“I remind all parties to the conflict of their obligation under international law to protect civilians against all forms of violence and to ensure people in need have access to the assistance they require,” stated Mr. O’Brien, adding that in the context of Mosul, where ISIL fighters are known to be using human shields in densely-populated neighbourhoods, parties to the conflict must take all feasible precautions to protect civilian lives.

“International law is unambiguous. The protection of civilian lives is a legal and moral duty that stands above all other objectives,” underscored the UN aid chief. 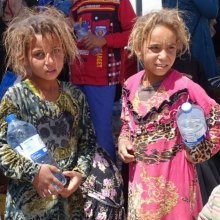