Letters are not case-sensitive
Send
Iran has introduced its latest and inventive achievements in the health sector to the seventieth World Health Assembly 2017, which is being held in Geneva on May 22-31.

According to deputy health minister Ali Akbar Sayyari, Iran seized the opportunity to introduce its accomplishments including the healthcare reform plan focusing on sustainable development in health sector on the sidelines of the 70th World Health Assembly.

Iran’s healthcare reform plan kicked off on May 4, 2014 with the main goals of decreasing the out-of-pocket expenses for the patients, promoting natural birth, and supporting underprivileged patients suffering from rare or incurable diseases.

“We were advised to document our achievements so that both Iranians and foreigners could have access to them,” Sayyari highlighted.

Giving healthcare services to everyone comprising dwellers both in cities and villages of Iran and Iran’s schemes to beat non-communicable diseases were lauded during the event, Sayyari added.

However, he noted, it was suggested that the government allot larger budget to the health sector and to spend it on all sectors equally by putting greater emphasis on prevention over treatment.

“As trained and skill manpower are pretty crucial to a country’s development we were recommended to come up with plans to decrease work-related deaths and injuries in association with other ministries and responsible organizations,” he said.

One of Iran’s weak points in health sector is road traffic deaths particularly among the youth which needs to be tackled in a collaborative effort between all sectors, the official explained.

The seventieth World Health Assembly is still ongoing and Iranian Health Minister Hassan Qazizadeh-Hashemi, heading a delegation, delivered speech, visited his counterparts and signed agreements with some of them.

The 70th meeting of the World Health Assembly (WHA), the chief decision-making body of the World Health Organization (WHO), opened at the UN’s Geneva headquarters. The assembly will unfold over a nine-day period and will convene over 3,500 delegates from the WHO’s 194 member states, according to a news release by the agency.

Deliberations will seek to craft policies conducive to advancing the 2030 Agenda for Sustainable Development universally adopted by UN members in 2015, with a focus on strategies to improve health systems globally; counter falsified medical products; protect the health of migrants and refugees, and ensure access to medicines and vaccines. 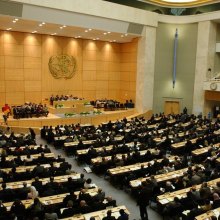