Letters are not case-sensitive
Send
Iran’s Parliament (Majlis) and the Mausoleum of the late founder of the Islamic Republic Imam Khomeini in the capital Tehran have come under terrorist attack.

At least four gunmen have reportedly intruded into the premises of the Majlis, opening fire on the security guards there. According to Tasnim news agency, at least eight people have been injured in the shooting attack today. Two people are said to have lost their lives in the firefight.

The assault has forced a lockdown on the legislature. Tehran MP Elias Hazrati has said that the assailants were armed with two Kalashnikovs and a handgun.

According to lawmaker Mehdi Kiaee, the situation is under control inside the parliament, while security forces are working to restore calm there. As seen in the footage below, Anti-Terror Special Forces have been deployed to the Majlis.

ISNA quoted an MP as saying that all the parliament doors are shut and one of the assailants has been surrounded by security guards.

Tasnim said in an update that the hostage rescue team of the Islamic Revolution Guards Corps (IRGC) has arrested two “terrorists” in the Imam Khomeini Mausoleum. The IRGC hostage rescue forces also killed one assailant at the Parliament, according to Tasnim.

An Interior Ministry source said a suicide bomber blew himself up on the fourth floor of the Parliament, where he had been holed up.

Separately, Fars said in a Twitter post that three gunmen attacked the Imam Khomeini Mausoleum in Tehran, opening fire on people inside and wounding a number of them.

The report said one of the assailants has been killed, another has blown himself up and a third one has been injured.

Informed sources say a suicide bomber’s explosive vest has also been discovered and deactivated in the vicinity of the mausoleum.

Iran’s state television quoted the Intelligence Ministry as saying that the twin attacks in Tehran were carried out by terrorists.

IRNA cited an official with the Intelligence Ministry’s Counter-terrorism Department as saying that some terrorist teams had entered the capital earlier in the day.

One was captured before managing to stage any attacks, while two others attacked the Parliament and the Mausoleum. At the shrine, one bomber was killed before setting off his explosives, but another managed to blow himself up. 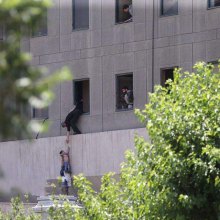