Letters are not case-sensitive
Send
Expressing grave concern about the humanitarian situation in Yemen, the United Nations Security Council adopted a Presidential Statement calling on all parties to engage constructively and in good faith to find a peaceful solution to the conflict in that country.

In the Statement read out during a formal meeting by Sacha Sergio Llorentty Solíz of Bolivia, which holds the 15-nation body's presidency for the month, the Council expressed its continuing support for the Secretary-General's Special Envoy for Yemen in his efforts to bring the parties to negotiations with a view to swiftly reaching a final and comprehensive agreement to end the conflict.

Strongly condemning an attack on the Special Envoy's convoy during his recent visit to Sana'a, the Council called on all parties to comply with international humanitarian law, to ensure the security of humanitarian and UN personnel, and to allow safe and unhindered access for humanitarian supplies.

The Council expressed grave concern about the “devastating humanitarian impact” of the conflict on civilians and emphasized that the humanitarian situation will deteriorate in the absence of a political solution.

Sharing the Secretary-General's grave concern about the threat of famine in Yemen, as well as deep concern over a recent cholera outbreak, it called on all parties to engage with the Special Envoy's proposals for increasing commercial and humanitarian shipments through Hodeida and other Red Sea ports – proposals which, it said, would help build confidence with a view to a durable cessation of hostilities as a first step towards a resumption of peace talks under UN leadership.

The Council went on to call for immediate mobilization of funds pledged to Yemen at a conference in Geneva on 25 April and for all Member States to fully implement an arms embargo as required by relevant Council resolutions. It also called on the Houthis and forces allied to former President Ali Abdullah Saleh to cease all attacks at Saudi Arabia.

In addition, the 15-nation Council reaffirmed its resolve to address all aspects of the threat posed by Al-Qaida in the Arabian Peninsula, Islamic State in Iraq and the Levant (ISIL/Da'esh) and all other associated individuals, groups, undertakings and entities. In that regard, it called upon all Yemenis to combine their efforts in countering the threat posed by terrorism. 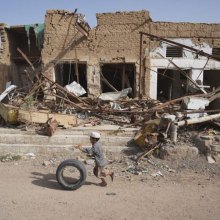