Letters are not case-sensitive
Send
Programmes supported by the United Nations Children's Fund (UNICEF) to assist more than nine million children in Syria and neighbouring countries are on the verge of being cut off due to a critical funding shortage.

“This is the most severe funding gap UNICEF has had since we started responding to the Syria crisis, one of the largest humanitarian operations in the history of the organisation,” said Geert Cappelaere, UNICEF Regional Director for the Middle East and North Africa, in a press release.

“Humanitarian needs continue to grow by the day inside Syria and in neighbouring countries, while pressure on generous host communities is seriously jeopardizing their ability to make ends meet,” he added.

UNICEF appealed for $1.4 billion for its emergency operations in 2017 inside Syria and in neighbouring Lebanon, Jordan, Turkey, Iraq and Egypt. To date, UNICEF has received less than 25 per cent of its funding requirements.

In its seventh year and with no end in sight, the war in Syria has become the largest humanitarian and displacement crisis in the world since World War II. Inside Syria, nearly 6 million children are in need of assistance while more than 2.5 million live as refugees across Syria's borders. Neighbouring countries, already supporting large numbers of vulnerable people, have received 80 per cent of all refugees from Syria.

Without an injection of new funds, some critical and lifesaving activities supported by UNICEF are at a serious risk being cut off.

These include safe water and sanitation services for 1.2 million children living in camps, informal settlements and host communities; access to healthcare and essential nutrition treatments for almost 5.4 million children; cash assistance to families that helps keep nearly half a million children in school; and the distribution of clothes and blankets in winter months.

UNICEF calls for a number of immediate actions to put an end to the war in Syria, prioritize the protection of civilians and the rights of children, improve the delivery of services and infrastructure such as healthcare, education and water in refugee host countries; and provide much-needed financial support to organisations like UNICEF to continue lifesaving assistance. 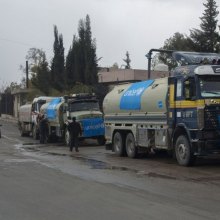