Letters are not case-sensitive
Send
In a letter to UN Secretary-General Antonio Guterres and the UN Security Council on Monday, Iran strongly objected to recent remarks by the U.S. secretary of state, requesting “all States condemn such grotesque policy statements.”

In a hearing on the 2018 State Department budget before the House Foreign Affairs Committee on Wednesday, Rex Tillerson said the U.S. major policy towards Tehran is to seek “peaceful transition” of the country’s government.

“This statement is a brazen interventionist plan that runs counter to every norm and principle of international law, as well as the letter and spirit of UN Charter, and constitutes an unacceptable behavior in international relations,” Iran's UN Ambassador Gholamali Khoshroo said in the letter.

“The Iranian government expects that all States condemn such grotesque policy statements and advise the U.S. government to act responsibly and to adhere to principles of the UN Charter and international law.”

Khoshroo said the remarks brazenly contravene the 1981 Algiers Accords, to which Washington is a signatory.

“This statement is also a flagrant violation of the 1981 Algiers Accords and other treaty obligations to which the United States is a party. According to the

Algiers Accords, 'the United States pledges that it is and from now on will be the policy of the United States not to intervene, directly or indirectly, politically or militarily, in Iran’s internal affairs”.

On Sunday, Supreme Leader Ayatollah Ali Khamenei dismissed the statement as hackneyed and old, emphasizing that Washington has been and will continue to be a loser.

Foreign Minister Mohammad Javad Zarif tweeted: "U.S. officials should worry more about saving their own regime than changing Iran's, where 75% of people just voted,” a reference to the unprecedented turnout in the May 19 presidential election in Iran.

This is a summary of the news: http://www.tehrantimes.com/news/414444/Iran-wants-all-states-to-condemn-Tillerson-remarks-in-letter 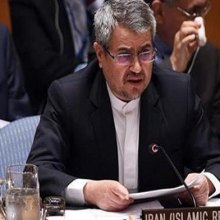