Letters are not case-sensitive
Send
Top United Nations officials declared that ending the occupation is the only way to lay the foundations for enduring peace that meets Israeli security needs and Palestinian aspirations for statehood and sovereignty.

“It is the only way to achieve the inalienable rights of the Palestinian people,” Secretary-General António Guterres said in a message to a forum held at UN Headquarters to mark 50 years since the start of the 1967 Arab-Israeli war, which resulted in Israel’s occupation of the West Bank, East Jerusalem, Gaza and the Syrian Golan.

In the message, read out by Deputy Secretary-General Amina Mohammed, Mr. Guterres said that it is time to return to direct negotiations to resolve all final status issues on the basis of relevant UN resolutions, agreements and international law. It is also time to end the conflict by establishing an independent Palestinian State, side by side in peace and security with the State of Israel, he added.

The occupation, he noted, has imposed a heavy humanitarian and development burden on the Palestinian people. “Generations of Palestinians have grown up in crowded refugee camps, many in abject poverty, and with little or no prospect of a better life for their children.”

Resolving the Israeli-Palestinian conflict will remove a driver of violent extremism and terrorism in the Middle East, the Secretary-General added, and “open the doors to cooperation, security, prosperity and human rights for all.”

Ms. Mohammed, in her own remarks, said today is an occasion not only to reflect on the costs and consequences of 50 years of occupation, but also to look ahead at what must be done to end this situation.

“I understand the deep sense of despair of the Palestinian people. For far too long, the international community has failed to find a just and lasting solution to their displacement,” she told the forum, which is convened by the General Assembly’s Committee on the Exercise of the Inalienable Rights of the Palestinian People.

“The lives of generations of Palestinians and Israelis have been confined by a conflict that has shaped the physical and human landscape with concrete walls, checkpoints, and watch towers, all under a heavy atmosphere of fear, mutual distrust and despair,” she continued.

“Some think that the situation can be managed. They are all wrong. It must be resolved.” Real peace, Ms. Mohammed stressed, cannot be achieved without a just and lasting resolution, adding that the two-State solution is the only path to ensure that Palestinians and Israelis can realize their national and historic aspirations and live in peace, security and dignity.

The two-day forum brings together international experts, including from the State of Palestine and Israel, representatives of the diplomatic community, civil society, as well as academics and students to discuss the ongoing occupation in a series of interactive panels. 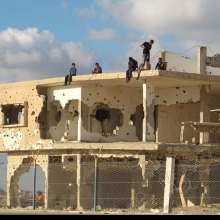