Letters are not case-sensitive
Send
Imprisoning Nabeel Rajab simply for sharing his opinion is a flagrant violation of human rights, and an alarming sign that the Bahraini authorities will go to any length to silence criticism. Salil Shetty, Amnesty International's Secretary General

The sentencing of human rights defender Nabeel Rajab, in his absence, to two years in prison for TV interviews is the latest shocking display of zero tolerance for freedom of expression by the Bahraini authorities, Amnesty International said.

“Nabeel Rajab should be commended for shedding light on allegations of serious human rights abuses; instead, Bahrain’s government and judiciary have once again tightened their chokehold on freedom of expression and branded him a criminal. No one should be jailed for speaking out about human rights.” Said Salil Shetty.

Nabeel Rajab was jailed in June 2016 over tweets he made that alleged torture in a Bahraini prison, and criticized the killing of civilians in the Yemen conflict by the Saudi Arabia-led coalition.

On 28 December 2016 a Bahraini court ordered his release, but the authorities refused to release him and instead he was immediately re-arrested and taken into custody in relation to TV interviews he gave in 2015 and 2016. His trial on charges of publishing and disseminating rumours and false news relating to the internal situation in the country began on 23 January.

Nabeel Rajab was held in solitary confinement for over nine months of his detention until his transfer to the Ministry of Interior Hospital in al-Qalaa having suffered from complications following surgery in early April. Prolonged and indefinite solitary confinement violates the prohibition of torture and other ill-treatment. Despite medical reports issued by the hospital confirming that he could not attend his hearings, the court continued the trial. On 14 June Nabeel Rajab’s defence lawyers and diplomats from the USA, UK and Australia walked out of court when the judge rejected the lawyers’ request to postpone the trial until Nabeel Rajab is fit to attend.

Nabeel Rajab has been in and out of prison since 2012 on charges related to his peaceful human rights activism, and has been banned from leaving Bahrain since November 2014.

Today the High Criminal Court in Manama found him guilty of “publishing and disseminating rumours and false news”.

“Nabeel Rajab has been persecuted for years for speaking out against human rights abuses. We reiterate our call on Bahraini authorities to immediately and unconditionally release him, and we are urging them to end their crackdown on freedom of expression and ensure the right of everyone in Bahrain to peacefully express themselves,” said Salil Shetty. 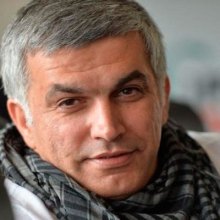