Letters are not case-sensitive
Send
“In this regard, we sought the views of both the religious jurists and scholars, in order to draw their approval, and some scholars have had positive views.” the head of the Parliament’s Women’s Fraction.

In an interview with ILNA, announcing this news the head of the Women’s Fraction in the Islamic Parliament, Parvaneh Salahshouri said: “the long and eroding bureaucratic process in the country is one of the main reasons for the delay in getting a result in this regard. We in the Women’s Fraction seriously pursue this matter. Although there are some complexities and sensitivities in the cultural issues of the country, it has both slowed the reaching the conclusion process, and also forced us to conduct more careful reviews.”

She added: “In this subject, on one hand the marriage of children is a problem and issue for some, such as us, and on the other hand, for some it is deemed a necessary matter, and it’s possible that this latter group will not see it as child marriage, but also even be in the belief that this matter is in fact the marriage of a girl who has reached the religious legal age, and marriage at such an age must be preserved in the law.”

Saying that the Shia jurisprudence is a dynamic jurisprudence, the head of the Parliament’s Women’s Fraction continued: “In this regard, we sought the views of both the religious jurists and scholars, in order to draw their approval, and some scholars have had positive views.”

She added: “Furthermore, we have asked the Centre for Parliament Researches to extract some information and pass it on to us so that we can observe in which regions of the country we are more faced with the ‘child spouse’ phenomenon, and what is the reason for that?”

Pointing out that we have divorced children of 15 years of age in the country, Salahshouri said: “for example in some places we see that a family is religious and insists that their daughter must marry early. But on the opposite in another place we see that poverty is a factor which forces the family to marry their daughter off at a younger age.”
She said: “These are some of the determining cases that must be studied so that we can establish the causes and reasons behind child spouses. We must know what are the damages or even if there are advantages, what are these advantages? We in the Women’s Fraction, will review all these cases next to each other, as our duty to the law. At the same time we endeavour to follow up and seriousness to increase the minimum age of marriage.” 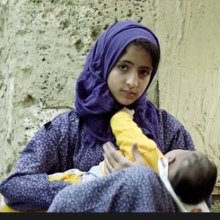 Implementation of 2nd Phase of Empowerment of Women Heads of Household – 65 years and under – in 15 Provinces human rights ,family