Letters are not case-sensitive
Send
In spite of improvements in wheat production in war-torn Syria – about 12 per cent more than last year's record low – the overall food security situation remains far worse than before the conflict, the United Nations food security and emergency food relief agencies have said.

According to UN Food and Agriculture Organization (FAO) and the World Food Programme (WFP), total wheat production estimates for 2017 stand at 1.8 million tonnes, in part due to an improved security situation. The estimate is, however, less than half of the pre-conflict ten-year average.

“The small improvement in the availability of food for Syrians is promising, but the needs remain high and more must be done to provide food for families affected by the crisis,” said Jakob Kern, WFP Country Director in Syria, said in a joint news release from the two UN agencies.

“With the evolving security situation, more farmers are expected to have access to cultivate their land again. Now is the time to step up our support, as agriculture is more important than ever for the livelihoods of many,” added Adam Yao, Acting FAO Representative in the country.

Furthermore, opening of some supply routes have allowed trade to slowly recover but in many parts such as in eastern Aleppo, where the entire infrastructure and markets were devastated, the recovery has been at a very slow pace.

In the news release, the two UN agencies also noted that humanitarian access to some besieged areas has improved compared to last year but access to some places such as Deir-ez-Zor and Raqqa remain severely constrained.

Across the country, food prices continue to remain at record highs and an estimated 6.9 million Syrians are still food insecure and an additional 5.6 million people are likely to become food insecure without the regular food assistance they receive every month, they added.

This is a summary of the news: http://www.un.org/apps/news/story.asp?NewsID=57198#.WXJOxVFdI1k 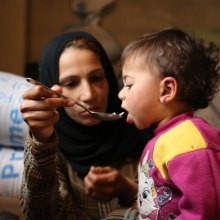 'We must not let 2017 repeat tragedies of 2016 for Syria' – joint statement by top UN aid officials Syria ,world food programme