Letters are not case-sensitive
Send
Yemen is facing the world's largest cholera outbreak, the United Nations health agency today warned, with 5,000 Yemenis falling sick every day – the majority of them children and the elderly.

“The cholera outbreak is far from being over,” Fadela Chaib, spokesperson for the UN World Health Organization (WHO), told reporters in Geneva. “The rainy season had just started and would exacerbate the situation in terms of transmission.”

WHO's office in Yemen said that since 27 April 2017, over 372,900 suspected cholera cases and 1,837 associated deaths have been reported in over 91 per cent of Yemen's governorates.

UN agencies, including WHO and the UN Children's Fund (UNICEF), are scaling up access to clean water and sanitation, and setting up treatment centres for oral rehydration therapy and other measures.

The response is also focused on providing food as the country remains on the verge of famine. Seventeen million people are currently hungry in the war-torn country, making then more vulnerable to catching the bacteria.

“It is necessary to break the vicious cycle of malnutrition and diarrhoea,” Ms. Chaib said.

Asked if the number of cases could rise about 600,000, as projected by the non-governmental organization Oxfam, Ms. Chaib called the current toll “heavy” and said the situation “remains alarming.”

In 2011, some 719,377 suspected cases of cholera were recorded in Haiti, and 8,767 people died, according to national figures citedby the UN Office for the Coordination of Humanitarian Affairs (OCHA). 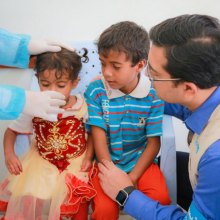