Letters are not case-sensitive
Send
Calling for “immediate care and protection” for children caught up in violence in Iraq's war torn Mosul and other Middle East conflicts, the United Nations Children's Fund (UNICEF) warned that the lives and futures of some 27 million across the region and parts of Africa are at risk.

“The worst of the violence in Mosul may be over but for too many children in Mosul and in the region, “extreme suffering continues,” said, Geert Cappelaere, UNICEF Regional Director for the Middle East and North Africa.

As for recently-liberated Mosul, he said that children in shock continue to be found, some reportedly among the debris or hidden in tunnels. Some have lost their families while fleeing to safety. According to reports, families have been forced to abandon their children or give them away – they are now living in fear, alone.

“Many children have been forced to fight and some to carry out acts of extreme violence,” he said, emphasizing: “These are horrific times for far too many children in Iraq and other conflict-affected countries in the region.”

UNICEF says that violence and conflicts are putting the lives and futures of nearly 27 million children at risk, impacted by violence in Yemen, inside Syria and refugee hosting countries, the Occupied Palestinian Territory, Libya and Sudan, as well as Iraq.

“In the north-eastern city of Ar-Raqqa in Syria, violence has further intensified over the past weeks, with children repeatedly coming under attack. Between 30,000 and 50,000 civilians continue to be trapped in the city as heavy violence continues around them,” Mr. Cappelaere explained.

Such horrors are not over even if children escape from immediate danger. They are being detained, abused and stigmatized for perceived affiliations, while tensions are high between and within communities, said Mr. Cappelaere.

“Those children who are alone need our support to help them find their families, be reunited and surrounded with care, protection and services, regardless of their family's origin or affiliation,” he underscored.

“As with any other child in the world, they have the right to be safeguarded, including through legal documentation. Children are children!”

The time to act is now, Mr. Cappelaere said, and asked: “How can we build a more stable and prosperous future for all while children are exposed to such horrors and treated this way?” 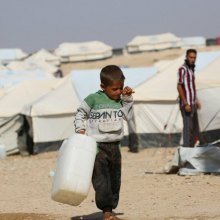 Mosul
“ 'The time to act is now;' end children's suffering in Iraq and across the Middle East – UNICEF ”
Share to
Tags IraqmosulchildrenUNICEFprotectionconflictviolenceCrisisHuman Rights Violations
Related Contents