Letters are not case-sensitive
Send
Israeli soldiers and police stormed a Palestinian hospital twice over the past week terrifying staff and patients and in some cases preventing doctors from providing emergency medical care to critically injured patients, said Amnesty International .

The raids on al-Makassed hospital in East Jerusalem took place as tensions escalated in Jerusalem and across the West Bank in recent days following an Israeli government decision to place metal detectors and search worshipers at the entrance of Al-Aqsa mosque after the killing of two Israeli policemen at the site on 14 July. At least four Palestinian civilians have been killed and more than 1090 were injured by Israeli police and military forces over the past 10 days in the widespread Palestinian protests against the decision and ensuing clashes.

“The conduct of Israeli forces who carried out violent raids on al-Makassed hospital harassing and intimidating staff and patients is utterly deplorable. There can be no justification for preventing medical workers from caring for a critically wounded patient,” said Magdalena Mughrabi, Deputy Director for the Middle East and North Africa at Amnesty International.

“They invaded the entire hospital…They even entered the neonatal unit… What do they want in there? It was pure terrorization of the patients,” he said, describing how soldiers shoved and hit a doctor who was trying to care for the injured young man in the operating room. The young man, Mohammad Abu Ghannam, died of his wounds during the scuffle.

The hospital raids took place against a backdrop of demonstrations and violence that has swept across the Occupied Palestinian territories with reports of excessive use of force by Israeli forces against Palestinian protestors. Of the more than 1,000 Palestinians injured 29 were wounded with live ammunition, 374 with rubber bullets and 471 sustained injuries as a result of tear gas, 216 people suffered bruises, burns or broken bones as a result of beatings, according to the Palestinian Red Crescent Society.

Many of the protests in Jerusalem’s Old City began peacefully, involving collective prayers in the streets outside the al-Aqsa compound, but descended into violence when Israeli forces attempted to disperse the protests using tear gas and rubber bullets. Protesters responded by throwing water bottles.

“Attacks on civilians can never be justified. However, justice for such attacks cannot be achieved through collective punishment of the Palestinian civilian population,” said Magdalena Mughrabi.

“As the occupying power, Israel has a responsibility to protect Palestinian civilians and must respect their right to peacefully protest. They must ensure that their forces limit their use of force in accordance with international law.”

This is a summary of the report. https://www.amnesty.org/en/latest/news/2017/07/israeli-forces-carry-out-violent-hospital-raids-in-ruthless-display-of-force/ 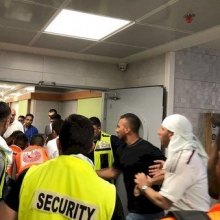