Letters are not case-sensitive
Send
Afghanistan’s Independent Human Rights Commission (AIHRC) and organizations defending human rights said on Wednesday the Mirza Olang massacre in Sayyad district of Sar-e-Pul province must be investigated and those behind the killings should be identified.

The human rights institutions said government is responsible for what happened in Mirza Olang, because despite the warnings, no action was taken to prevent the tragedy.

According to the human rights defender organizations, the victims’ families are living in very bad circumstances and that their needs should be addressed.

The human rights defender organizations said what has happened in Mirza Olang, is genocide and that the members of the institutions said investigators from the International Criminal Court should investigate the incident.

“Women, children and elders were shot to dead. A number of bodies have been remained in Mirza Olang. Some have been carried to Sar-e-Pul center where they were buried near a shrine,” Murtaza Saram, a resident of Sar-e-Pul said.

Members of the human rights defender organizations said people were shot and others thrown off the mountains of Mirza Olang. Victims of Taliban and Daesh militants included men, women and children. By their actions, insurgent groups want to create fear and ethnic and religious divisions among the people.

“Government is responsible for this massacre,” Ahmad Shah Stanikzai, a member of the human rights and civil society organizations said.

According to the organizations, the primary findings of the government task-team sent to Sar-e-Pul province, show that although the central government was warned of threats against the residents of the Mirza Olang village, no action was taken to prevent the tragedy.

“Who is responsible for this? The military corps officials or Mazar police, or was the decision taken in the National Security Council and in the presidential palace? Why such has a big and tragedy happened?” Wadood Pedarm, a member of the civil society organizations demanded to know.

Meanwhile Sar-e-Pul residents said approximately 700 families were living in Mirza Olang village, but now all of them have been displaced and Taliban and Daesh have burned down most of their houses. 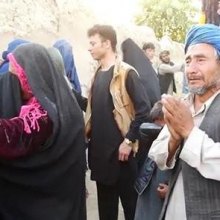 Afghanistan: Civilian casualties show how unsafe it is for refugees to be returned Taliban ,Human Rights Violations ,human rights ,Afghanistan