Letters are not case-sensitive
Send
As the number of Rohingya who have fled to Bangladesh surpasses 400,000, United Nations agencies are scaling up their efforts to assist the displaced and Secretary-General António Guterres renewed his call on the authorities in Myanmar to take steps to address the crisis.

“We are all shocked by the dramatic escalation of sectarian tensions in Myanmar’s Rakhine state,” Mr. Guterres remarked in his address to the opening of the General Assembly’s high-level debate. “A vicious cycle of persecution, discrimination, radicalization and violent repression has led more than 400,000 desperate people to flee, putting regional stability at risk.”

He stressed that the authorities in Myanmar must end the military operations, allow unhindered humanitarian access and recognize the right of refugees to return in safety and dignity. They must also address the grievances of the Rohingya, whose status has been left unresolved for far too long, he added.

Marzuki Darusman, the Chairperson of the Independent International Fact-Finding Mission on Myanmar, told the UN Human Rights Council in Geneva that it is clear that there is “a grave humanitarian crisis” underway that requires urgent attention. In addition to the over 400,000 people who have sought refuge in Bangladesh since 25 August, Mr. Darusman noted that there are reports that nearly 200 Rohingya villages in the affected area have been emptied.

As the number of those crossing the border into Bangladesh increases, the UN refugee agency (UNHCR) is ramping up its operations, including moving new arrivals into family tents and temporary communal shelters at a new extension site next to the Kutupalong camp near Cox’s Bazar. Spokesperson Duniya Aslam Khan told a news conference in Geneva that refugees have told UNHCR staff that they suffered from cold and rain during their treks from Myanmar.

With an estimated 415,000 refugees having arrived since late August the humanitarian challenges have become immense, according to UNHCR, which noted the “remarkable generosity” by many individual Bangladeshis, with people trucking food and clothes to the refugees in the camps and others camping along the single main road.

Also today, the Secretary-General’s Special Representative on Sexual Violence in Conflict, Pramila Patten, said her office has been closely monitoring reports of sexual violence committed during the insurgency operations. She is particularly concerned about the security of women and girls who constitute the majority of those crossing the border.

This is a summary of the news: http://www.un.org/apps/news/story.asp?NewsID=57552#.WcIc7tgVTIU 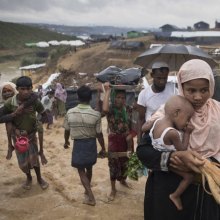