Letters are not case-sensitive
Send
Recalling the tragic 11 September 2001 terrorist attacks in the United States that sparked the global ‘war on terror’ – which has since “lost its way” – the President of Lebanon told the United Nations that while the Middle East had borne the brunt, terrorism has spread like wildfire to all continents and must be tackled at its roots.

“No one knows how far this terrorism will reach and how it will end,” Michel Aoun said in his address to the General Assembly’s annual debate. While Lebanon had been one of the phenomenon’s earliest targets, the Government has prevented anyone from crossing the “red line” of national security and stability. Indeed, despite terrorists’ abilities to organize in some towns and cities, Lebanon had been able to eliminate cells, as had recently been seen in its victories against the Islamic State of Iraq and the Levant (ISIL/Da’esh) along the border with Syria.

When the war began in Syria, he continued, Lebanon had been able to preserve its unity despite severe political divisions it was experiencing. “The Lebanese people have proven that they are humanitarian and responsible,” Mr. Aoun said noting that they had welcomed Syrian refugees, sharing food, schools and other resources with them.

Nevertheless, waves of displacement and refugees had increased Lebanon’s population by 50 per cent, he said, citing severe overcrowding, a deteriorating economic situation and increased crime. More dangerous was the fact that terrorists had taken shelter among the refugees, making the need to resettle displaced persons to their homelands urgent.

Mr. Aoun stressed that Lebanon distinguished between “voluntary” and “safe” return, based on the reasons for displacement. In cases of individual asylum for political reasons, political refugees would voluntarily decide when to return, with acceptance by the host country. Lebanon considers the collective asylum taking place in its territory – for economic and security reasons – as displacement, rather than asylum, as it had not received host country acceptance, and thus, constituted “population invasion.”

Noting that conflicts trapped the Middle East in poverty and turned it into a “hotbed of extremism,” he said any solution should be accompanied by economic and social measures aimed at achieving growth and improving social conditions for young people. He called on the UN to seriously consider establishing a “joint Eastern market.” 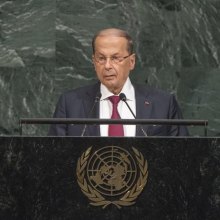