Letters are not case-sensitive
Send
Congratulating the International Campaign to Abolish Nuclear Weapons (ICAN) on being awarded the 2017 Nobel Peace Prize, top United Nations officials said that the recognition is a reminder of the need to grim threats posed by such weapons to humanity.

“This Prize recognizes the determined efforts of civil society to highlight the unconscionable humanitarian and environmental consequences that would result if [nuclear weapons] were ever used again,” read a statement attributable to the spokesperson of the Secretary-General.

“At a time when nuclear anxieties are at the highest level since the Cold War, the Secretary-General calls on all countries to show vision and greater commitment for a world free of nuclear weapons,” it added, noting the urgency to end the threat of a “nuclear nightmare.”

Concerted efforts by ICAN as well as many other civil society organizations contributed to the adoption of the Treaty on the Prohibition of Nuclear Weapons, in July this year, the first multilateral legally binding instrument for nuclear disarmament in decades.

Also, the UN's top disarmament official offered her own congratulations to ICAN and underscored that achievement of a nuclear-weapon-free world continues to be an urgent priority for the UN.

Expressing hope that the Nobel Peace Prize would give new momentum to the agenda, Izumi Nakamitsu, the UN High Representative for Disarmament Affairs called for “serious efforts by the international community to pursue disarmament as a means for preventing conflict, reducing international tensions and achieving sustainable peace and security.”

More than 15,000 nuclear weapons remain in global stockpiles, with many on high levels of alert. Furthermore, tensions have flared over the nuclear weapons development programme of the Democratic People's Republic of Korea since past few months.

Nuclear disarmament has been an objective for the UN since the very first General Assembly resolution in 1946, which established the goal of ridding the world of nuclear weapons and all weapons of mass destruction. 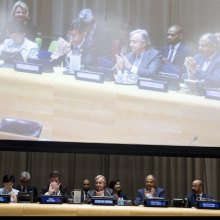 The only world safe from use of nuclear weapons is a world completely free of them – UN chief Nuclear Weapons ,Antonio Guterres ,Peace ,Disarmament ,Security