Letters are not case-sensitive
Send
Hospitals, ambulances, schools and displaced people escaping violence are being routinely targeted by airstrikes in Syria, resulting in high numbers of deaths and injuries, and making September the deadliest month of the year, according to the United Nations regional relief coordinator for the crisis.

“I am appalled by reports of high numbers of civilian casualties due to heavy air attacks in Syria,” said Panos Moumtzis, the Regional Humanitarian Coordinator for the Syria Crisis .

“September was the deadliest month of 2017 for civilians with daily reports of attacks on residential areas resulting in hundreds of conflict-related deaths and injuries,” he added in a news release issued by the UN Office for the Coordination of Humanitarian Affairs (OCHA).

This week, airstrikes on Raqqa City killed dozens of people and injured many others while some 8,000 others remain trapped there. Between 19-30 September, airstrikes on residential areas in Idlib killed at least 149 people – the majority of whom were women and children. “Attacks on medical facilities are depriving people in need of their right to life-saving medical care,” stressed Mr. Moumtzis.

Schools and hospitals in Idlib have been forced to close for fear of being targeted. Three explosions in Damascus city caused the death of 20 people and injured 15 more. Civilian casualties were also reported in Rural Damascus, Hama, Aleppo and Deir-ez-Zor. “I would like to praise the phenomenal work carried out by humanitarian workers and in particular national staff,” he continued, noting that rescue workers on a daily basis risk their lives to help others.

“The UN calls on all parties to the conflict to immediately take all measures to protect civilians and civilian infrastructure throughout Syria,” underscored the Mr. Moumtzis. He asserted that targeting civilians and facilities, including hospitals and other medical facilities is “simply unacceptable and constitute a grave violation of human rights and international humanitarian law and may amount to war crimes.” “All parties to the conflict must respect their international obligations and act in a way that ensures the protection of civilians and humanitarian workers,” concluded Mr. Moumtzis. 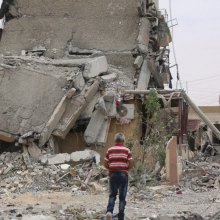