Letters are not case-sensitive
Send
“sanctions imposed against Iran are some of the most extensive and complex sanctions which have many layers, something that has complicated the environment. Due to them being imposed on oil and gas, and the financial and banking system of Iran, sanctions have had severe negative impacts on the ordinary people of the country.

Submitting more than 10 statements, a number of Iranian NGOs in consultative status to ECOSOC who were attending the 42nd Session of the Human Rights Council, called on the Council and Special Rapporteurs to pay special attention to the subject of human impact of America’s unilateral sanctions.

In these statements, issues such as the threat to the lives of Iranians due to restrictions of access to medicine, rise in inflation, threats against people’s basic rights such as right to life, right to development, right to health and right to enjoyment of the basic needs for life have been highlighted. Also the statements call on the Council to through submission of real reports on the human impact of sanctions to condemn these actions as violations of human rights.

In this sitting which was moderated by Dr. Hassan Fartowsi, international law researcher in the University of Geneva, Dr. Erica Mort, top researcher from University of Geneva said: “sanctions imposed against Iran are some of the most extensive and complex sanctions which have many layers, something that has complicated the environment. Due to them being imposed on oil and gas, and the financial and banking system of Iran, sanctions have had severe negative impacts on the ordinary people of the country.
She added, “Trump’s behavior with his ‘sanctions are coming’ slogan shows that he ignores the human rights repercussions of sanctions and solely uses sanctions as tools to fight Iran. The Iranian sanctions in the field of medicines, medical equipment, participation of doctors in important international conferences, submission of articles and papers for scientific seminars and sittings, have all left negative impacts. America’s domination of the medicine manufacturing industry has resulted in secondary sanctions in this regard have destructive impacts on Iranian citizens.”

International law researcher explained, “when the risk of financial and banking transactions with Iran increase, even if sanctions do not put restrictions on these transactions, automatically the transactions of a country become complicated. When the United States fines many international companies and banks with millions of dollars, it is only then that the real restrictions and impacts of sanctions become clear.”
At the end of the sitting Dr. Fartowsi gave a comprehensive explanation of the diverse effects of the Iranian sanctions in increase in prices, drop in medicine imports and problems appearing in the field of medical treatment research.

The next speaker was Dr. Farzan Sabet, researcher from University of Geneva. Pointing to the recent firing of Trump anti-Iran national security advisor John Bolton, Dr. Sabet said, “I hope this good news will come with the lifting of heavy pressures from the Iranian people.”
This researcher explained, “From 2006 onwards, sanctions against Iran changed in nature from being preventive to being targeted. The diversity of the current sanctions regime and their being hegemonic through the presence of the United States, have resulted in the humanitarian impacts of sanctions to be de-emphasized.
At the end of his speech he said, “With the help of international sister organizations, Iranian NGOs must work hard to show the real impacts of sanctions on Iranians to the global public opinion. Perhaps some of the cases are officially banned and are not sanctions, but high risk and fear results in the interaction levels of these organizations with Iranian organizations and people to drop.” 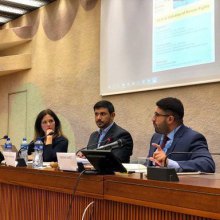