Letters are not case-sensitive
Send
Tehran (AFP) - Iranian photographer Newsha Tavakolian has said she will donate part of a 100,000-euro ($112,000) Dutch award to charity, including Syrian and Iraqi refugees.

"It is hard for me to enjoy this prize as much as I would like to, seeing the region where I work and live in flames and tens of thousands seeking refuge in faraway lands," Tavakolian said on her Facebook page.

The 34-year-old self-taught photographer considered as one of the first professional female photojournalists in Iran, said she would be donating 15,000 to an organisation helping Syrian and Iraqi refugees.

"I have worked in both their countries and want to give back to all the kindness Iraqi's and Syrians always welcomed me with, despite the dire circumstances they live in," she said.

The Amsterdam-based Prince Claus Fund dedicated to culture and development said on its website Thursday that it had awarded its Principal 2015 prize to Tavakolian.

"Newsha Tavakolian is a self-taught photographer who combines photojournalism and art to offer new insights into the lived experience of people in Iran and the wider Middle East region," it said.

"One of the first professional female photojournalists in Iran, her work ranges from bold reportage of political events to sensitive portraits and evocative series on subjects such as the insecurity of middle-class youth, female Kurdish fighters or the impact of sanctions on individual lives.

During a recent trip in the Middle East, Tavakolian took pictures to illustrate the struggles of Kurdish women fighting the jihadist Islamic State group in northern Iraq.

Tavakolian said 13,000 euros of her prize money would be given to Sheed Award, an independent documentary photography award in Iran.

Another 10,000 euros will go to Mahak Foundation, an Iranian charity supporting children with cancer, and 7,000 euros to local organisations supporting and protecting animals.

Tavakolian's pictures have been published by Time magazine, the National Geographic and Magnum Photos.

In 2014, Tavakolian returned a 50,000-euro prize from the Carmignac Gestion photojournalism award citing a dispute with the French foundation over her right to artistic freedom.

She later changed her mind following negotiations with the jury.

The Prince Claus awards are given to individuals, groups and organisations based mainly in Africa, Asia, Latin America and the Caribbean. 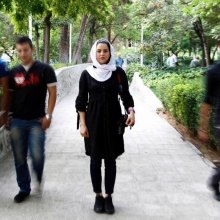