Letters are not case-sensitive
Send
Iran Review: In continuation of Manama’s policy of revoking citizenship of its political opponents, the Kingdom of Bahrain announced last Monday, June 20 2016 that it has revoked citizenship of the country’s top Shia cleric, Ayatollah Sheikh Isa Qassim.

This comes while Sheikh Isa Qassim was born in 1938 in Diraz region of Bahrain, that is, three decades before Bahrain came into being as a country in 1971. The interesting point is that this decision by Bahraini government has evoked protests both from the government of Iran and the United States. France has also voiced concern about this measure by Manama. The UN Human Rights Council (UNHRC) in Geneva has noted that the Bahraini government’s decision is at odds with international laws and regulations. Ravina Shamdasani, a spokeswoman for the UNHRC has noted that revocation of citizenship is admissible under “special conditions,” but has added that this step must be taken in the service of “legitimate goals” and it should be also open to appeal. However, and despite international reactions, the Al Khalifah regimes seems to have no intention for changing its repressive policies.
World’s first rank in citizenship revocation
Among Arab countries and also at global level, Bahrain ranks first in terms of revoking citizenship of its citizens under political excuses, especially in response to peaceful opposition against the government’s policies. This issue has made Bahrain subject to strong criticism from regional and global human rights bodies. Last April, Nidal Al Salman, a member of the Bahrain Center for Human Rights, said 280 Bahrainis have had their citizenship revoked since 2012 and about 200 cases of revocation of citizenship have taken place in 2015 alone. He added that university professors, religious leaders, businesspeople and former parliament members have been among those people who have lost their citizenship. Meanwhile, the UN high commissioner for human rights has greatly criticized revocation of Bahrainis’ citizenship. According to an announcement by the Bahrain Center for Human Rights, more than 3,000 people have been sent to jail on charges of taking part in anti-government demonstrations or inciting hatred against the ruling regime.
In its statement on March 7, 2016, Amnesty International said forceful expulsion of citizens from Bahrain and revocation of their nationality is a blatant violation of human rights and other rules of international law, especially the principles of the Universal Declaration of Human Rights and the International Covenant on Civil and Political Rights. Despite all the criticism, revocation of citizenship has apparently turned into a major tool for the suppression of political opponents in Bahrain. Amnesty International has added that revocation of citizenship has turned into the best weapon in the hands of the Bahraini government to suppress its opponents, while issuing warning about increased frequency of revocation of citizenship and forceful expulsion of the country’s citizens.
Systematic citizenship as opposed to revocation of citizenship
On the other hand, in parallel to revoking citizenship of opposition figures, the government of Bahrain follows the policy of systematic granting of citizenship and intentional acceptance of foreigners. It seems that the Al Khalifah regime has put the policy of changing the composition of the country’s population on top of its priorities in order to counter its opponents. Many analysts maintain that Al Khalifah is trying to implement the same policy in the country, which the British monarchy implemented in Palestine. They believe that by revoking the citizenship of Bahraini people and granting citizenship of Bahrain to foreign nationals and expulsion of Bahrainis from their homeland, Al Khalifah regime is actually implementing the same strategy that Britain implemented in the occupied Palestinian territories. Based on a plan by the British government, Israel started in 1967 to secretly change the composition of population in the al-Quds (Jerusalem). As a result, while in 1967 about 7,000 Palestinians lived in al-Quds with no Israeli citizen being present there, at present, there are 200,000 Israelis living in this city along with about 300,000 Palestinians.
By following suit with that plan, the Al Khalifah officials are pursuing a purposive and long-term plan to change the composition of Bahrain’s population – most of whose residents are Shias – according to their will. Hadi al-Mousavi, a prominent member of Bahrain’s Al-Wefaq National Islamic Society, says in this regard, “Since Shias account for a majority in Bahrain and Bahrain is the only member country of the (Persian) Gulf Cooperation Council with a Shia majority population, the Al Khalifah regime is incessantly trying to change the population composition of the country.” Another noteworthy point about this policy, which is being followed diligently by the government of Bahrain, is that Bahraini officials, unlike officials of other countries in the world, give no figures on the number of people who have been granted the citizenship of Bahrain on an annual basis.
With regard to figures that have been released so far, a report by Al-Wefaq National Islamic Society can be cited here, which says, “The Al Khalifah regime granted citizenship of Bahrain to more than 95,000 foreign nationals between 2002 and 2014.” Sheikh Ali Salman, the secretary general of Al-Wefaq National Islamic Society, who is now doing time in Al Khalifah regime’s prison, made a speech in August 2014, describing as “catastrophic” the regime’s policy for granting citizenship to foreign nationals while calling on the people of Bahrain to seriously oppose this policy. In reality, the policy of revoking citizenship of political opponents in Bahrain has been used by Al Khalifah regime as both a tactic and a strategy and this reality can explain why Manama is resisting international protesters against the country’s recent suppressive measures. 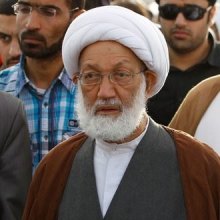 If passed, Israeli legislation would be ‘another nail in the coffin’ for two-state solution – UN expert UN Human Rights Council