Letters are not case-sensitive
Send
Fighter jets from a Saudi-led military coalition repeatedly bombed a crowded reception hall in Sana where mourners were gathered after a funeral on Saturday, killing more than 100 people and wounding hundreds of others, according to Yemeni health officials and witnesses.

The strikes destroyed the hall and so overwhelmed the city’s hospitals that the Health Ministry broadcast pleas on radio stations to summon off-duty doctors to help tend to the wounded, and families beseeched passers-by outside hospitals to donate blood.

Yemeni officials said the scale of the carnage made it hard to quickly compile a complete death toll.

Tamim al-Shami, a spokesman for the Health Ministry, said at least 104 people had been killed and 550 wounded. He added that the death toll was likely to rise, as rescuers were still working to remove bodies from the rubble.

“There are charred bodies, and some were cut to shreds and couldn’t be identified,” Mr. Shami said, adding that children were among the victims.

“Some of the people who were carried out of the hall were headless,” said Muhammad al-Hadrami, who lives near the hall and rushed there soon after the strikes. Others had “smashed legs,” he said.

Mr. Hadrami said two nearly simultaneous strikes hit the hall, followed by a third about a minute later. Some rescue workers gathered outside the hall immediately after, scared to enter for fear of another strike.

Another witness reported four strikes spread over a slightly longer period of time.

When asked about the strikes, Brig. Gen. Ahmed al-Asiri, a spokesman for the Saudi-led coalition, wrote in a text message that coalition officials were aware of the reports and that it was possible there were other causes for the blasts.

The Saudi-owned Al Arabiya satellite network later reported that the coalition had not carried out any strikes near the hall. General Asiri confirmed that report.

But in a statement, Jamie McGoldrick, the United Nations humanitarian coordinator for Yemen, blamed airstrikes for the destruction and said he was “shocked and outraged.” Others shared videos on social media that appeared to show a strike from the air.

The Saudi bombing campaign is more than a year old, but it has been eclipsed by the wars in Syria and Iraq, and has been largely ignored by world powers.

If the death toll is confirmed, the strike on Saturday would be one of the deadliest of Yemen’s war. The war began when rebels, known as the Houthis, and their allies stormed into Sana, the capital, and forced the government into exile. Since then, the conflict has fallen into a grinding stalemate, with the Houthis controlling much of the north and forces nominally loyal to the exiled president, Abdu Rabbu Mansour Hadi, in the south.

A military coalition led by Saudi Arabia is seeking to restore Mr. Hadi’s government and has been bombing the Houthis.

More than 9,000 people have been killed, and many Yemenis have been pushed toward famine while extremist groups like Al Qaeda and the Islamic State have taken advantage of the chaos to step up their operations.

The strikes occurred in one of Sana’s most upscale districts, at a large reception hall that residents rent for weddings and to receive condolences after funerals.

The funeral on Saturday was for the father of Galal al-Rawishan, a Houthi ally who serves as the interior minister.

Mr. Rawishan was not killed in the strikes, but other officials were, including Abdulqader Hilal, the mayor of Sana.

Videos posted online showed dead bodies strewn about the charred interior of the hall and streets filled with ambulances rushing the wounded to hospitals.

Rima Kamal, a media officer with the International Committee of the Red Cross in Sana, said the group had donated 300 body bags as well as extra medical supplies to three hospitals to help them cope with the influx of dead and wounded.

Eric Jeunot, the head of the Doctors Without Borders mission in Yemen, said that at least 400 people had been wounded in the attacks but that he was unsure of the death toll.

“Many patients need surgery due to burns and trauma from shrapnel,” Mr. Jeunot wrote in a text message. “Some are still in critical situation in the hospitals.” 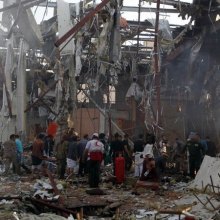 UNICEF: Over 20 Million in Yemen in Need of Aid Saudi Arabia ,humanitarian ,Yemen

If the Saudi-Led Coalition is Committing War Crimes, the US is Aiding and Abetting Them humanitarian ,Saudi Arabia ,Yemen