Letters are not case-sensitive
Send
With the military operations to wrest the control of Mosul from Islamic State of Iraq and the Levant (ISIL/Da’esh) terrorists, the United Nations Assistance Mission for Iraq (UNAMI) called on the Iraqi people to unite in support of their country’s armed forces and is urging “that every step be taken to avoid civilian casualties.”

“This liberation is an Iraqi operation backed by the entire international community, and the United Nations fully supports the Government of Iraq’s efforts to free its land from the terrorists and restore the rule of law over its territory.” the UN Secretary-General’s Deputy Special Representative for Political Affairs, Gyorgy Busztin, said.
Although Mr. Busztin stated the liberation must be followed by genuine dialogue leading to an historic compromise among all components of Iraqi society in order to consolidate victory and ensure sustainable peace for the future and every effort should be made to ensure the protection of the civilian population from the effects of armed conflict and violence in accordance with the relevant principles of international human rights and humanitarian law, United Nations humanitarian agencies operating in Iraq are bracing for what could be a displacement catastrophe requiring the largest and most complex global response in 2016, in the wake of the military offensive to oust terrorists from Mosul.
“Displacement is expected to start” Jens Laerke, spokesperson for the UN Office for the Coordination of Humanitarian Affairs (OCHA), told reporters in Geneva. According to OCHA and other agencies, up to one million people may be forced from their homes due to the military operation against Islamic State of Iraq and the Levant, of which 700,000 may be in need of shelter assistance and up to 200,000 may be displaced.
UN relief officials described the situation as having the potential to be one of the worst-case scenarios requiring the largest and most complex humanitarian operation in the world in 2016, or a catastrophe resulting in one of the largest man-made displacement crises in recent years.
“Protection concerns for all those civilians are at the forefront of the preparations of the humanitarian community, and there are already protection monitoring teams on the ground. UNHCR has already opened five camps, ready to shelter 45,000 people. There are plans for a total of 11 camps to open in the coming weeks, with a capacity for 120,000 people.” Mr. Laerke said.
William Spindler, the spokesperson for the Office of the UN High Commissioner for Refugees (UNHCR), said “UNHCR has already opened five camps, ready to shelter 45,000 people. There are plans for a total of 11 camps to open in the coming weeks, with a capacity for 120,000 people. In addition, UNHCR will have 50,000 emergency shelter kits available for out of camp populations, covering a total of 300,000 people. There will also be 25,000 tents available for families living outside of camps, covering a further 150,000 people.”
Moreover, it seems there are also risks of vulnerable populations facing exploitation and abuse, including possible heightened intercommunal and ethnic or religious tensions and conflicts, and family separations and detentions for security screening.
Tens of thousands of people could be trapped between the fighting lines or held as human shields, for which there have been precedents, in areas which have been recaptured from ISIL in the past weeks and months.
“There is also a fear, based on some evidence, that ISIL might be using chemical weapons,” Thomas Lothar Weiss, the Chief of Mission for the International Organization for Migration (IOM) in the country, said.
Christophe Boulierac, spokesperson for the UN Children’s Fund (UNICEF), said that more than half a million children and their families in Mosul would be at extreme risk in the coming weeks. For Mosul specifically, UNICEF is asking for $43 million and has received $30 million so far.

This is a summary of the report. For further details see the following link 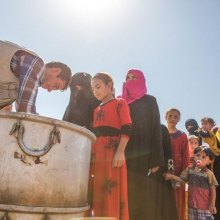